This special work meeting was for pre-season fire planning. Each year, the Manti La-Sal has a pre-season fire meeting where they meet with four different counties. They have already met with San Pete and Juab counties and plan to meet with Emery County later this month.

One of the purposes of the meeting is to gather with the decision makers in the event that a significant wildfire or other catastrophe occurs.

It was explained that there are two types of fires. The first is human caused, which can be started by campers, equipment and power lines. The second is naturally caused, usually by lightning strikes. With the two different types, there are different suppression strategies. Discussion was had briefly about the firefighting procedures and how many fighters have been lost nationwide recently.

A representative of the Manti La-Sal reflected that, as a county, the commissioners may have a few ideas on what is more valuable that may be different from other agencies.

Each year, the Chief of the United States Forest Service sends out letters of leader’s intent. From that letter, a few items are addressed. The first is wildfire response, stating that instant response strategies and tactics, as well as where and when risks of responders and success, is understood and exercised. The fighters and members of the Manti La-Sal will remain committed to stop, think, talk and act.

The commissioners were assured that, from the get-go, if a fire is within the Carbon County limits, they will be notified. They will also be told of how the fire is to be managed, where the limits will be set on how large it will get before switching strategies to get it extinguished and more.

Representatives of the Manti La-Sal National Forest also spoke about the difference between knowing when to extinguish a fire and when to use the fire and utilize the resources to clean an area.

They spoke on living with wildfire, especially in such a rural area, but stressed that they will strive to get it to where it is not catastrophic. Commissioner Tony Martines asked the Manti La-Sal members what their ultimate goal with the wildfires is, to which they replied that the ideal plan is a combination of several items, including managing the forest, burning off what is needed and logging.

While it was stated that logging is of great importance in the area and other rural settings, it was recognized that logging and fire is not the answer to everything,. It was explained that they are hard at work to find a balance and get to where an area can be approached with timber and a prescribed fire to break it up enough to only have a manageable fire, which is generally about 3,000 acres.

It was also stated that, at the time, there are no planned fires for the area. 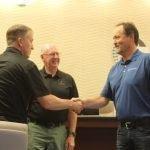 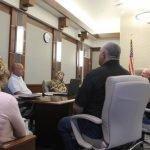 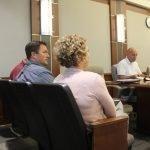