Brigham Young University played host to the 3A and 1A State Track and Field Championships on Friday and Saturday. While the team portion did not go the way the local schools would have wanted, there were several standouts, including five state champions.

Haylee Prescott won her second high jump title in as many years. She also took second in long jump and seventh in the 200. Then, freshman Traxton Jewkes came from behind to jump 6’2″ to take state in the boys’ high jump while fellow Dino Will Carmichael came in sixth in the same event.

In javelin, Bowden Robison became the third Dino to take state. Haley Garrish came close to another championship for the Dinos, but just missed out, taking second in discus and fourth in shot put.

Eminie Elliot came in third in the long jump and fourth in the 100 hurdles while Linsey Jespersen finished fourth in the 300 hurdles. Robison took fourth in shot put while Bradley Wood took eighth. Finally, Tymber Bennett came in seventh in javelin.

“There wasn’t a single area we were bad in,” said head coach Jimmy Jewkes. “They all ran great! Many of them set PRs (personal records), which is what you want.”

The Lady Dinos came in fifth with 57 points while the boys’ took eighth overall with 31.5 points.

The Spartans shined in the shot put as Derek Canterbery took first overall with Maddox Christman in second. Canterbery then took second in discus (with Christman in seventh) and fifth in javelin. “I am super proud of how well Derek Canterberry prepared and performed this year. His hard work paid off and he scored big for us all season,” began head coach Hugh Christiansen. “Maddox Christman also scored well and I am super grateful for his hard work and example.”

In an extremely competitive 1600, Jess Christiansen finished in sixth, less than three seconds behind the winner. Christiansen also took fourth in the 3200, just 10 seconds shy of first, and then came in fourth once more in the 800, where he missed first-place by only 3.6 seconds. Emery finished fifth overall with 43 points, all from Canterbery, Christman and Christiansen. “Jess didn’t have the state meet he hoped for.” Christiansen continued, “[Jess] still had a great season with the top times in 3A in both the 1600 and 3200.”

Whitley Christensen came in fourth in the high jump while Daicee Ungerman was close behind in fifth. That gave the Lady Spartans nine points to tie for 14th. “On the girls side Daciee and Whitley did well in the high jump.” Christiansen concluded, “we had a solid medley and 4×4 team comprised of the same girls (two freshman, one sophomore and one senior). Although we will loose and miss Brynn Gordon, I see big things in the future for those girls in the relays and the individual events in the next few years.”

Jenilee Keener took state in the javelin, dominating the competition with over 10 feet of cushion. She later came in seventh in shot put to give Green River 12 points to take 11th overall.

Michael Schmitz ended his impressive senior year with a second-place finish in the high jump. The eight-point leap left Pinnacle tied for 15th.

Full results for all classifications can be found here.

Congratulations to all, especially the new state champions! 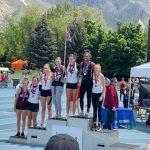 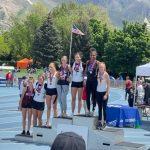 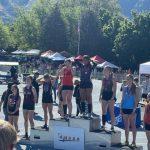 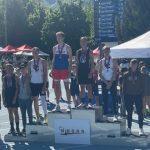 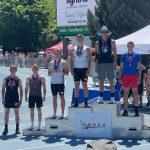 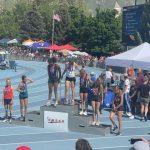 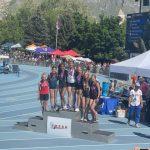 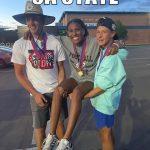 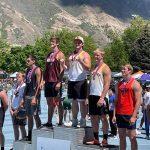 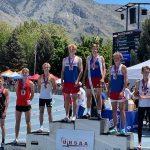 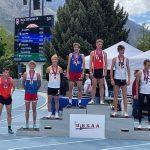