Miss Emery County Royalty, past and present, opened the Emery County Commission meeting with a presentation on Tuesday afternoon. Commissioner Kent Wilson remarked that the pageant was a fantastic two days and he was very impressed with level of talent these young girls have. He invited them to come to the meeting to thank them and their pageant leaders for their service. The girls spoke about their personal growth and experiences by being involved in the pageant. They also spoke about their platforms.

Ignacio Arrien then addressed the commissioners regarding purchasing new fire trucks for the fire district. He requested their consideration of the PILT (payment in lieu of taxes) funds that the county received. He said he has been working on a refurbishing program for the fire trucks and had two trucks, Green River and Cleveland, funded through Community Impact Board funds. Arrien has found that it is better to buy new trucks than refurbishing old trucks.

He hopes to cycle the program, doing two trucks each year. Castle Dale and Huntington would be next with Ferron, Elmo, Emery and Orangeville to follow. Arrien desires to keep $400,000 for an emergency. Commissioner Wilson said that the money is usually used for financial institutions of higher learning, but last year it all went to emergency services. He also added that they have 60 days to decide what to do with the PILT money they received, which was $209,000 last year.

The commissioners stated that they will discuss the topic further and get back to Arrien and the fire district.

Captain Ekker from the sheriff’s office then spoke to the commission to request approval of the Emery County’s 2021 Emergency Management Planning Grant application. This is a yearly grant that provides extra funds for training and equipment. This was approved by the commission. The next grant request was a new one that would provide funds for canine body armor. Captain Ekker explained that this is a valuable asset to the sheriff’s office. Approval was granted.

Next, a business license previously approved by the Land Use Committee for Millsite House Airbnb was granted by the commissioners.

The next three items on the agenda were to dispose of real property owed by Emery County in Ferron, Orangeville and Green River. The commissioners are starting the selling process by sending letters to the adjacent land owners of all three parcels, posting a notice of advertisement and accepting sealed bids. The bids will be opened and awarded at the Aug. 17 commission meeting. If for some reason the top bidder is unable to secure financing, the bid will go to the second highest bid depending on the attorney’s approval.

A release of liability and assumption of risk form for the use of the Emery County events rock wall was approved. The cities who use this wall will be required to sign this form. A resolution authorizing the filing of cross appeals for 2021 centrally assessed properties filed by Centurylink, Inc. was adopted. This enables the commission to appeal the filings of centrally assessed properties such as PacifiCorp.

To conclude, Commissioner Wilson reported that in August, he invited the State Tax Commission to Emery County to make a presentation on raising assessed valuation of private property while rates for centrally assessed are dropping. He also announced that there will only be one commission meeting in August and that will be Aug. 17. There will be no commission meeting on Aug. 3. 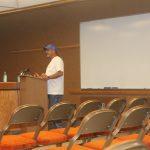