With just two games remaining on its schedule, the Price American Legion baseball team traveled to Beaver to take on St. George in a doubleheader on Friday. The team was outscored 28-4 in the games, officially ending its 12-game summer schedule. The two teams met in Beaver to split the distance between the two.

Price was shut out in game one, losing the five-inning game 11-0. Brendan Johnson took the mound and pitched five innings before Trevor Pummell came on in relief for the fifth and final frame. Price tallied just three hits in the game, three singles off the bats of Johny Tallerico, Duncan LaCombe and Harley Barker.

Pummell continued on the bump for Price in game two, pitching five innings in the 17-4 loss. Tallerico relieved Pummell for the sixth and final inning. LaCombe led the offense with two singles and a walk. Tallerico doubled, walked and scored two of Price’s four runs. Brayden Tubbs, Nathan Velasques, Dallon Lessar and Johnson each contributed singles in the game.

“I thought we had a successful season,” head coach Willie Ellington said. “You don’t count wins and losses, but if you finish with a full team it was a success.”

The highlight of Price’s season came when the team took first place at the wood-bat only Green River Wyoming tournament on June 19-21. It was the second year in a row the team placed first in the tournament. A 4-1 record, including a 7-1 win over Riverton, Wyo. in the championship game, earned Price the title.

“I just want to thank those who supported us during the season,” Ellington concluded.

Though there won’t be any more games played, the team will still hold a drawing on Aug. 5 for a number of prizes. A raffle has taken place throughout the season for $5 per ticket. Prizes include a home theatre system and a Henry Golden Boy .22 caliber rifle, among others. Those who have purchased tickets need not be present to win prizes. 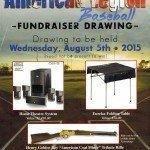