Price City Mayor Joe Piccolo conducted the annual state of the city address last Friday. The mayor highlighted accomplishments and looked ahead to the bright future of the community.

“This is a city with no limits,” Piccolo stated. “There is nothing we can’t accomplish together if we put our minds together.”

Once a booming mining community, Carbon County’s coal industries have declined in recent years. Piccolo admits that the workforce scenery has changed, but the area remains strong. “We are the most resilient,” he announced. “Carbon County is a successful organization. Don’t think we won’t overcome challenges we face in this community.”

Looking ahead, the mayor explained various projects that are in the works. An education initiative will promote relationships between city workers and local youth. The program will encourage each city employee to help in a Carbon school for four hours per month. “Price City currently has 110 full time employees,” Piccolo explained. “That means 140 hours per month devoted at local schools.”

A pilot project by the Department of Workforce Services is also underway. The project is geared towards teens and will focus on providing career paths and internship opportunities for local youth.

Piccolo vows to focus on education during 2014. The city is working on a lunch program that will team students up with firefighters and law enforcement once a month. Students from each school will be selected by educators to have lunch with emergency personnel, complete with a ride in a service vehicle.

Although the mayor looked ahead in his state of the city address, he also highlighted accomplishments from the previous year. “We live in a safe environment in Price,” Piccolo said. “It is one of the safest places in the state to work.”

As an example, the Price City Utility Metering Department received the safety team of the year award. The department has not experienced an accident since 2009 and was presented the award by Piccolo.

The Price City Employee of the Year award was also handed out during the address. Tamara Gray was presented with the award and was voted by her peers and fellow city employees to receive the recognition.

Paul Dupin was honored with the Visionary/Service Leader Award. “He never lets anyone down in the community,” Piccolo explained. “He stand for what Price City represents.”

The Southeastern Utah District Health Department also received a certificate of appreciation for their work over the past year at promoting a healthy community. Anti-tobacco campaigns and exercise endorsement made a positive impact on residents last year.

Overall, Piccolo assured residents that the state of the city is sound. “Be grateful for what we have and strive to live in gratitude,” he challenged. “Chose the trail least traveled, not the well traveled road. Together we will make a positive impact.” 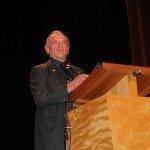 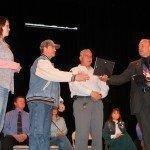 Members of the Price City Utility Metering Department receive the Safety Team of the Year Award. 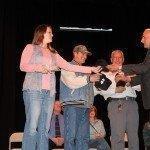 Mayor Piccolo presents the utility department with Price City hats as part of their award. 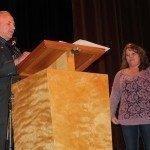 Tamara Gray was named Price City Employee of the Year. 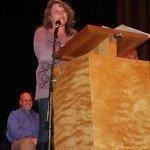 “My employees make me good. I truly love what I do,” Gray explained. 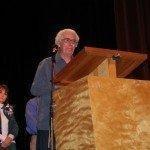 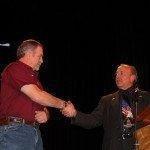 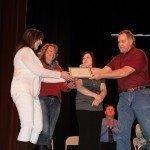 A Certificate of Appreciation was awarded to members of the local health department.