The Price City Council met on Wednesday to discuss a full agenda and, notably, to fill a vacancy in the council. The vacancy was created when former councilman Miles Nelson was appointed as public works director for Price City.

Four candidates for the position attended the meeting; Todd Richardson, Terry Willis, Karl Bentley and Kendra Seeley. Each was given time to introduce themselves and each answered a total of four questions including how they would introduce themselves and their plans to fulfill their role if elected, how they would handle employees’ possible questions, their understanding of time demands and other duties of a council member and even a description of what they considered to be their worst interpersonal skill and how they are able to work with it.

After each candidate had an opportunity to answer the questions, they were given one final chance to argue why they should be chosen and were also asked to explain a voluntary act given in the last six months that had an impact on another.

Among other items discussed was the possible approval of a monetary donation for the eagle scout project of Douglas Laursen. Laursen plans to install backboards at the Price City Tennis Courts, thus enabling a single person to play.

The council expressed interest in the idea but asked Laursen to contact other interested parties for input and possible donations and then return to the next city council meeting and discuss it further.

The sale of a plot of land to Richard Nuffer of Beehive Homes was also approved. The area, according to provided information, located at 75 East 500 North, measures approximately two acres.

Several other items were discussed throughout the meeting. Tune in to ETV Channel 10 from noon to 3:00 p.m. daily for the broadcast of this and other public meetings. 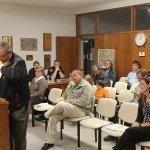 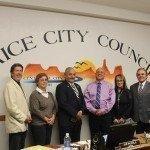