At the Price City Council meeting, which took place on Wednesday evening, the council tackled the item of the Price City Planning and Zoning Commission member appointment.

This was actually a re-appointment of three members, including Jan Young, Judy Beacco and Todd Thorne for three-year terms of the Price City Planning and Zoning Commission. Nick Tatton spoke on this item, stating it is the annual cycle for part of the commission.

He then requested that the council approve all three appointments. Beacco and Thorne were in attendance, though Young was unable to attend.

Before the unanimous approval of the members, Councilmember Layne Miller spoke, stating that the members had been hard at work for some time and believed that it was a position that sometimes went unnoticed by many.

“I want to compliment them for what they do,” Miller stated.

Following the approval, Price City Recorder Sherrie Gordon then conducted the oath of office ceremony for the two present members, with the remark that Young would be sworn in at a later time. Mayor Michael Kourianos then presented them with a certificate of appointment. 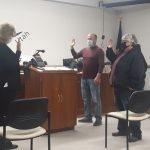 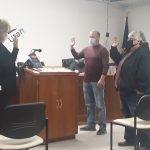