A permanent stage will soon grace Washington Park thanks to a winning vote from the Price City Council on Wednesday. The idea came about after the temporary stage, which is usually utilized during events like International Days, caused problems for users of the stage such as burning the feet of dancers or provided uneven ground for performers.

“This project wasn’t planned,” public works director Gary Sonntag explained in respect to this year’s budget. Although this project was unplanned, Sonntag said money will be able to redirected from other ZAP Tax projects this year so that the stage can be in place, to the west of the park pavilion, before International Days.

The cost of the the first phase of the stage project, which includes the cement slab section, will cost around $12,000.

According to Price City Customer Service Director Bret Cammans, the stage will save the city money after just a few years. “The cost of the stage has minimal impact,” he said. He went on to explain that the cost of renting a stage would be over $2,000 while a cover would tack on an additional $1,000.

Council members Kathy Hanna-Smith, Layne Miller and Miles Nelson all voiced their support of the park addition. However, not everyone was so sure about the project.

Council member Wayne Clausing explained that he thought other projects should be finished first and that the proposed project should follow due process before being adopted as Price City’s next endeavor.

Finally, the project came to a vote. Council members voted 3-2 in favor of the stage, with Hanna-Smith, Miller and Nelson in support of the project. Plans will now be underway to start building the stage with help from city and contracted workers.

At the meeting, council members also discussed Price City Public Works Week. The week long event will take place May 18-24 with a theme of “Building for Today, Planning for Tomorrow.”

“I encourage all persons to support, appreciate and celebrate the work performed by our Price City Public Works employees in building inspection, engineering, public works, streets and fleet, parks and cemetery and water and sewer,” mayor Piccolo stated.

Also at the meeting, Terry Willis was sworn in to the Price City Community Progress Board. Willis expressed her excitement to serve on the board and make a difference in the community.

Robbi Etzel received a $650 scholarship from Price City. Etzel will be attending USU Eastern in the fall in pursuit of an associate’s degree. The Carbon High senior stated that although he is unsure of what he plans to study, he is excited to stay in the area to attend school. 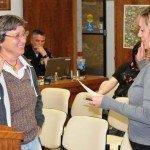 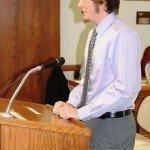 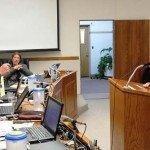 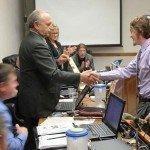