Cowboys and royalty were on hand as infrastructure, capital improvements and area watershed planning were the focus of Wednesday night’s Price City Council meeting.

With Wayne Clausing acting mayor pro tempore for the meeting, the council approved the Carbon Rodeo Club’s request for $500 in funding to help with its annual rodeo on April 11. Club representative Zach Jensen said that this event brings in participants and their families from all over the state. Because the fairgrounds have the only facilities that can house horses and trailers overnight, most will stay in Price and that will benefit the area.

Miss Carbon County Brielle Bogdin also addressed the council to speak about her platform. She is focusing on gun safety and will be using National Riffle Association material featuring Eagle Eddie to help educate local youth.

Wade Williams from City Sanitation gave the council a heads up that there will be an increase in garbage collection fees due to a 4% raise for ECDC tippage fees, which was recently approved by the Carbon County Commission. He explained that amounts to nine cents per customer for each bin they have.

Debbie Marvidakis from Southeastern Utah Health District addressed the council about the Kick Ash 5/10k Run and Walk on March 22. She said that the 10K course will be different this year, but she has been working with Tom Stefanoff from the sheriff’s office to assure the safety of the course.

Scott Merrill was on hand to inform the council of the Lunatic Triathlon coming in June. The course will remain the same as last year, but a free children’s triathlon has been added.

Much of the remainder of the meeting involved the review of several master plans that affect the future of the area. Russell Seeley went over the Price River Watershed Plan. This document will help the city and surrounding areas address issues and concerns with maintaining a healthy watershed in the area. One item that raised interest is the possibility of lower elevation reservoirs to help with flood control and water storage.

Seeley, who was recognized earlier in the night for his five years of service with Price City, also presented a master assessment development that his department compiled. Information from all the master plans are represented. The assessment boils this down into a priority list for taking care of waterline, sewer lines and road replacement.

Using an algorithm that the team developed, the list of streets scheduled for work over the next year had been targeted. Near the top of the list is 400 East, which is near the college and high school. This road recently had its water line replaced, but still needs a new sewer line. Once this is complete, a new top coat will be done to repair the ruts and potholes that currently plague the roadway.

Five other road sections were also identified for infrastructure repair and road surfacing. Sections of 100 South, 200 West and 400 South are all on the list.

The assessment stays within the $500,000 budget allowed. $67 million would be needed to fix all streets and infrastructure within Price City. The city is looking to make the repairs in a manageable and fiscally sound way.

A public meeting was held to go over the Capital Improvements Budget for 2014-15. Nick Tatton went over items on the budget. Roads and infrastructure projects were top on the list. Two police cars will be purchased as well as replacements for a few other city vehicles. Tatton explained that a vehicle is retired or sold for surplus when a new one is purchased. He also explained that the city has held off on replacing many of the vehicles, but it is time to deal with the issue. 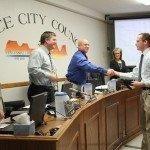 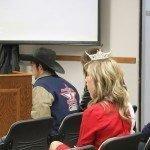 Cowboys and Royalty wait their turn to present to Price City COuncil on Wednesday. Zach Jensen from the Carbon Rodeo Club and Miss Carbon County Breille Bogdin listen intently to the council reports