The new Price City Youth Council was sworn into office by Judge George Harmond at the Price City Council meeting on Wednesday evening.

With Terri Tubbs as their advisor, the youth council will have the opportunity to bring their thoughts and ideas to better the community. The council will meet as a team a each month to plan and discuss various projects they hope to accomplish.

The Price City Council is excited to have the newly formed youth council. “We look forward to what they will bring forward to us and want to thank Terri for all of her hard work accomplishing what we’ve had coming for months,” said Price City Mayor Michael Kourianos.

City councilman Rick Davis also expressed his thoughts on the new council and welcomed them to their newly appointed positions. “We’ve been seeing things in one way and we need to be reminded that there is a different way to look at things,” Davis said. ” What you do today is what’s going to effect tomorrow.” 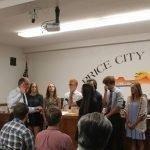 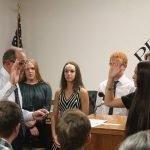 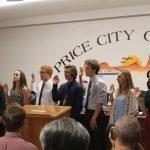 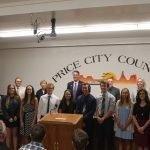