A changing of the guard at two schools in Price this year have a former teacher returning to one of his old haunts as a principal and another coming from southern Utah to lead teachers on his campus.

Seth Allred, who has taught in Carbon School District for 20 years, has taken over the reigns at Mont Harmon Middle School this year while Chris Winfree, who has been teaching at Desert Hills Middle School in Washington County, will lead Castle Heights Elementary in the northeastern part of town.

Allred is a veteran principal, having served in leadership at both Sally Mauro Elementary and Wellington Elementary over the past eight years. His teaching background came as a science instructor at both the old East Carbon High School and a two-year stint at Mont Harmon. He also coached athletics at both schools.

“I am excited to work at the secondary level again,” he said, although he also admitted he will miss the Wellington community where he served up through last year, just as he did the Helper community a few years before when he changed schools.

“You know, I hadn’t planned to leave Wellington, but then this came up and I decided I would like to take on the challenge,” he said.

Allred said he sees Mont Harmon as a school with a lot of possibilities. He said he hopes under his leadership he can help it to grow and work on new ideas for the school.

“I have a great staff and in particular Karen Bedont, the assistant principal, is great,” he stated. “She compliments my style and the things I do.”

Allred said Mont Harmon will have some specific intervention periods set up for students who need help on certain subjects. Targeted intervention is part of the program of the district to improve student performance.

“Everyone will get that time, and it is a plus for students who are not struggling with any subjects either,” he explained. “Students get to pick so few electives and with these intervention times, those students can look at taking some classes on other things. We are working on some foreign language classes, art and music classes and even cooking classes.”

Allred said school days are going to become intensive so he is going to see to it that homework is cut down where it can be done.

“We are going to have the Professional Learning Community conversation here by knowing the students, knowing what they need and then providing for their needs,” he said.

Winfree has been a history teacher for eight years in the St. George area, being one of the original faculty at the middle school he was at in southern Utah. A multi-talented person, his enthusiasm showed as he sat for an interview.

“I expect a learning curve in moving to an elementary school, but after meeting the staff here at Castle Heights, they are supportive and I can see how great they are,” he said as he sat in his office while remodeling work was going on around the building.

Born in Florida and raised in Orange County, Calif., Winfree went to BYU for a while and then transferred to what was at the time Utah Valley State College, where he got his bachelor’s degree. That is also where he met his wife Paula. Later he went to Southern Utah University to get his teaching certificate. He moves to Price with five children, four boys and one girl.

“My wife’s sister lives here and they have been trying to get us to come here for some time,” he said. “They told us about openings in the district and actually I applied for the Mont Harmon position.”

While that job went to Allred, Winfree said that the administration told him that they liked what he said and his background and asked him if he would take an elementary principal job.

Besides his eight years teaching in Washington County, his first year as a teacher was spent at a new charter school in Salt Lake County and then the next two at Provo Canyon School for girls.

“That was interesting because my first year at that new charter school there was so little structure,” he said. “Everything was wide open. Then, at Provo Canyon, it was very highly structured. I had opposite ends of the spectrum my first few years teaching.”

He said the thing he and his wife wanted most was to work in a good community and after looking around, they found Price to be just that.

“I feel like Price and Carbon County are a good fit for us,” he said.

He comes from a system that has been using Professional Learning Communities for a long time, actually the full eight years he was there.

“The fact is that we will strive through our PLC that no students will be left behind because we will tweak or fit the educational system to each of them so they can succeed,” he said on a more serious note.

He has watched how teachers he has worked amongst have improved through PLCs and really believes in common forms of assessment for students. In that way teachers can look at results frequently and see how teaching methods others are using may be superior to what they are doing and learn from that.

“It’s more than just sharing pieces of a curriculum. Instead it is about sharing teaching styles,” he said.

Winfree loves baseball and is a big Atlanta Braves fan, although he is getting more into basketball these days.

He is also very talented. Besides all the teaching skills he has, he plays guitar, sings and paints. The wall behind his desk is filled with paintings he did of some of his favorite things. One depicts the Liberty Bell in front of an American flag, two others depict one of his favorite baseball players of all time, Willie Mays.

He is not beyond having fun either. He told the teachers if they need him to dress up for some project or do some fun things, he will be right there.

“I used to dress up in my American History classes all the time,” he said. “One time I grew out a full beard and recited the Gettysburg Address as Lincoln to my classes.”

The two new leaders in the Price community will have a positive effect on students for years to come. 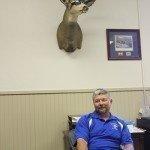 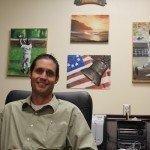