Aniston Curtis and Bayler Griffin opened the National Honor Society ceremony at Emery High School with a musical duet and the pledge was led by vice president Jessica Olsen.

Officers of the chapter introduced the values: scholarship, citizenship, leadership and character to the inductees. Chapter president Camrey Johnson, and vice president Olsen introduced inductees and Principal Larry Davis presented them their certificates.

Principal Davis addressed the nearly 50 inductees in attendance. He complimented them on their high grades and citizenship accomplishments. He admonished them to realize that the journey to their lofty goals is as important as the destination as they will find their souls as they experience each activity. He stated that his goal for idealism is made real by these honor society inductees.

Advisor Shanae Butler concluded the evening by installing each member with the oath of membership. 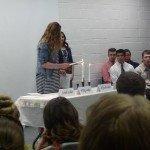 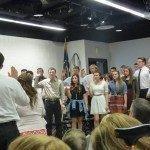