This past school year at Emery High School, there were a couple major changes. One change was the school schedule. The schedule went from seven 45-minute classes everyday to an “A day, B day” schedule. The students go to five classes each day and then go to five different classes the next day. Language arts and math classes are double-booked, so the students go to those classes everyday. Each class is now 65 minutes long. Principal Gordon said the schedule change went well. The students adapted quickly and enjoyed the extra time to work in class. Many students thought it made the day go by faster. The teachers had to adjust to teaching for 65 minutes instead of 45 minutes. Sometimes, the teachers forgot which day it was and had to ask the students, but the teachers quickly got the hang of it and enjoyed the new schedule. 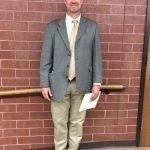