PT3 had two athletes awarded first place all around. Congratulations to Jaycee Peterson and Kobe Cruz.

The following athletes also competed at the event:

Also at the event, athletes from Carbon County Recreation competed. The following athletes placed at the competition:

The head coach at this meet was Tabitha Peterson. Assistant coaches were Kendra Rhodes, Misty Cruz and Felicia Davis. For more information about Pineau’s Tumbling & Trampoline Team, including classes and pricing, please call (435) 472-3106. 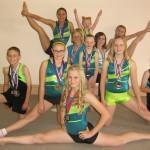