Following last year’s avalanche rescue, the Emery County Search and Rescue Team felt the need for newer equipment and training. A push began to increase the ability of the winter search and rescue team.

“People come here to recreate and expect to be helped if they get hurt or lost,” Emery County Commissioner Kent Wilson said. With the reputations in Emery and Sanpete counties as some of the best snowmobile trails, it became necessary to update skills and equipment.

The first step to become more prepared came with the addition of two new snow sleds. Through private and public donations, this goal has been accomplished. Chris Hallor, Off Roads Director of Utah State Parks, was contacted and he said that if they could match the machine with a second one, the Utah State Parks would donate one machine. The Utah State Parks’ revenue comes from OHV registrations and gas taxes.

Several comments were made at the Emery County Search and Rescue meeting on Monday evening expressing gratitude to the team. Farm Bureau representative Tyler Jeffs said he was grateful to live in Emery County and was glad to be able to help donate the machine. Emery County Sheriff Greg Funk thanked everyone for their contributions, saying he appreciated everyone’s help. He further remarked that the search and rescue team members are truly the heroes as they take time away from their jobs and family to help others.

“It will give us a fighting chance of helping those in need that we did not have before as the old snowmobiles just couldn’t do it,” said James Byars, search and rescue team member. 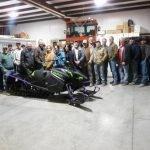 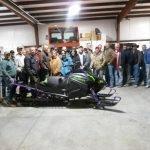