Some of main points of the amendment are to maintain Class B roads, encourage the Utah Department of Transportation and federal highway administration to make appropriate decisions, and work with the Bureau of Land Management (BLM) and Forest Service to communicate with local officials. It would also develop a memorandum of understanding to establish perimeters of roads and trails. Acquiring Title 5 right-of-ways for all Class B roads in the county would also be included. This amendment was approved and will be forwarded to the land use committee for a public hearing before forwarding it to the Emery County Commission.

Emery County Commissioner Kent Wilson then spoke to the council about an inquiry he received from a resident about public access to the north end of Long Street in Green River leading to public lands. He asked the council members about their feelings and explained that in previous years, the county tried to find solutions to the situation but had not been able to do so. He did say that the right-of-way (old road) now goes right under the property owner’s pivot sprinkler. A road around would be very expensive, steep and would have to permitted by the BLM. It was also noted that the Dingell Act has nothing to do with private land. Chairman Rod Player asked the council to do some research and place it on the agenda for next month so action or recommendations could be made.

Marc Stilson with the Division of Water Rights was the first agency to address the council. He reported that the Bureau of Reclamation will be releasing 500,000 acre feet from Flaming Gorge to help with the low levels at Lake Powell. Another 500,000 acre feet would be added from delivery flows in the lower basin. This is emergency action for the power flows out of Lake Powell and Lake Mead. He did report that run off levels are actually up from last year.

Daren Olsen, Forest Ranger, announced that the outfitters guides, whether renewing or processing permits, would come out Friday, May 6. He also gave dates of when the forest gates will open. Lower Ferron Mountain will open May 5. Some others will open on May 20 while everything will be opened June 5.

In addition, Sag Grouse counts were up on Wildcat. The Forest Service Plan draft is coming in June, sometime, while Range plans will continue operating. The north end of the Manti (north of Huntington) is looking at range improvements and the Environmental Assessment (EA) is open for comments now.

Jim Wells with Utah State Parks then introduced a new colleague, Maegan Blackwelder. It was reported that Green River State Park will extend the campground by 11 sites, but there is not a set completion date. The water is on at Millsite and it is open. Huntington North is working on new restrooms so lots one through four are closed, but 12,000 trout have been planted there. Goblin Valley is fixing the electrical problems so there will be hot water during the winter. New horseman trails are open. Wells said they are keeping things about the same, but considering a different parking lot for horsemen. The conveyance for Goblin Valley is tentatively scheduled for June 19. Blackwelder announced a division between parks and recreation, stating that they are now separate departments.

To conclude, Nate Roberts of the Department of Agriculture announced that funding is available for predatory animal control but must be applied for by June 17. The date is the same for small livestock producers on federal lands needing help with predators. 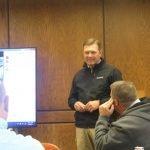 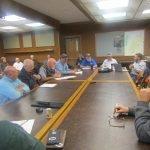