Drew Ryniewicz sings while highlighting the Report, Support and Defend program that students were asked to use to fight bullies.

Nationally known speaker Jessie Funk told Wellington Elementary students on Monday morning that she was bullied when she was in junior high and then in turn became a bully herself.

“I was sad inside and felt powerless,” she said. “I was lucky  that I had a school that recognized what I was doing and sent me to a summer camp where I learned to be a leader, but not a bully.”

The program was all part of the Utah Anti-Bullying Coalition program to get kids to think about their actions and how to react to others that are bullies and how to help those that are being bullied.

The program was in many ways a pep rally and a rock show combined. With Funk giving kids strong positive messages and music from Branden Mendoza, a well known performer from Texas and former X Factor contestant Drew Ryniewicz who hails from Arizona, the assembly was filled with excitement and enthusiasm.

Funk has thrilled audiences across the land with some of her insights into youth.  She has generally spoken to teenage audiences in high schools, but is now carrying her message to elementary schools.

Funk told the assembly that when she does these programs she always leaves the students with some information they may not know about bullying and also a tool that the kids can use to combat bullies.

“You need to teach yourselves to be kind,” she said. “That’s why we have the Stand 4 Kindness movement.”

She asked the students to “pinky swear” that they would go to the Stand 4 Kindness (stand4kind.com) website and report someone for being kind.

She, along with the two singers, urged kids to follow the Report, Support and Defend battle against bullying.

“I was bullied in school,” Mendoza told the kids in between a couple of numbers he performed for them. “You should report a bully to someone, even if it is outside of school. You should also support  those that are bullied, like talking to them and getting them out of the situation where they are being bullied. And you should defend them. Stand your ground and be sure those that are being bullied are okay.”

After sharing a musical number with the kids Ryniewicz said she was also bullied in school and many people told her she would never be a successful singer.

“Singing made me happy , but when people were mean to me it made me want to give up, but I didn’t,” she said. “It’s not only about having good friends who support you but also by being a good friend to people too.”

At  the end of her section of the program she urged the kids “to say one nice thing to another person today.”

Funk finished up the program by talking about loving science her whole life and how she decided to study the brain and get a college degree in psychology. Her specialty soon became bullying and how to end it.

“You can beat a bully by being smarter than they are,” she said. She went on to say that bullies draw power from someones pain and fear. Staying positive in a bullies face is a big key to defeating what they are trying to do. She demonstrated that by having a young man from the audience pretend to bully her. She responded by being affirmative about herself and by also being complimentary about his good qualities.

She asked kids to name their favorite super heroes, first those that are make believe and then those that are real such as mothers, sisters, people  from the military and their very own teachers, saying that most people don’t know what they sacrifice to teach kids. She finished by saying super heroes are all around us, and that kids have the ability to be one themselves.

“If a bully confronts you, don’t get mad or sad,” she said. “That is what empowers a bully. Instead be the super hero of your own story.” 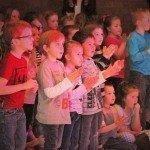 Students at Wellington Elementary stand and are excited by Branden Mendoza’s music. 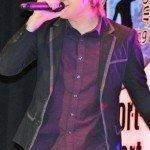 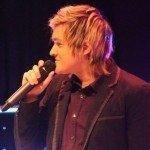 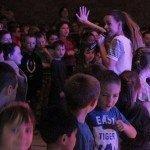 Drew Ryniewicz comes out into the crowd to entertain and sing to the students. 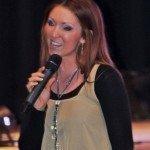 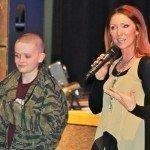 Trent Thayn, a student at Wellington Elementary, acted as a bully so that Funk could demonstrate the positive ways to handle someone who initiates that kind of action. She told the crowd that Thayn should go on the stage because of the performance he gave.