As motorists leave Helper and drive toward Price, a strikingly understated billboard by Morgantown has a simple, but urgent message: “No one is better off without you.”

Two people, well known in the community, appear on the right side of that message, holding pictures of their sons who took their own lives. The billboard and other activities by the Hope Squad Coalition is part of an effort to stem the alarming tide of suicides in the community.

Southeast Utah Health Department’s Debbie Turner made the decision to appear on the billboard to hopefully help at least one individual to not take their life. She said that as a surviving family member, the pain never goes away. One learns to live with it and deal with it, but it remains. It has been four years since her 27-year-old son committed suicide.

Turner’s voice cracked with sadness as she talked about how drugs changed her sweet boy into a desperate man. His battle with addiction tore her family apart and she said it was heartbreaking to not know how to help him.

Her son’s brushes with the law did not help. Turner said they slapped his hands and told him to stay out of trouble, when what he needed was inpatient treatment. For the family, the cost of sending him somewhere was overwhelming.

“You would do anything to help your child and you see these places advertised on TV, but there was no way we could find the money to send him there,” she said. “He was a good kid who made some bad choices.”

In his final days, Turner said he most likely felt like everyone would be better off without him. She wishes she could have helped him see that was far from the truth.

Many people hide their emotions and hope that there is a chance it will get better, Turner said. Suicide and drug abuse problems cross all spectrums of the community regardless of income, religion among others. It can happen in any family and Turner is willing to do whatever it takes to send a message of hope to anyone willing to listen.

Next to Turner on the billboard is Don Marrelli. Marrelli not only lost his son to suicide, but continues to deal with it often as a first responder as part of the Carbon County Ambulance crew. He knows the toll suicide takes on everyone involved, from both the personal side and from someone on the outside helping families deal with the shock and sorrow.

“I did not decide to put myself on that billboard for people to feel sorry for me,” he explained. “I did it to encourage people to talk about an issue that has been seen as having a stigma about it.”

Marrelli thinks the more people openly talk about suicide, the more likely they can identify someone who may be thinking about taking their life, and prevent it.

He has relived his son’s final day over and over in his head trying to see if there were warning signs in retrospect. Marelli admits there were no signs.

Marelli’s son was 14 and seemed like a happy-go-lucky boy. He was an eighth grader involved with school activities and was a gifted athlete. The day he took his life, he came home from school and chatted with a neighbor, talking about things he was looking forward to just like any other day.

Marrelli had left for work at the ambulance and had only been on shift a few hours when he got the call to go to his own home. His son had been on the phone talking to a friend when he said, ”Tell my dad I love him.” The friend heard a gunshot and called 911.

Each year goes by and the memory of his son is never far from his thoughts.

“He would be 33 and I wonder things like would he be married and what he would be doing right now,” Marelli said.

Marrelli said the hole left is still enormous. Each time he goes on a call for a suicide, he feels pain.

“It is different,” Marrelli said. “The edges are a little smoother than the one from my son’s death, but it is a hole.”

Marrelli explained that responding to suicide takes its toll on the 25-member EMT squad. Each time it takes a nick out of their emotions, affects them in a negative way and takes time to repair. When they are called out for a suicide, there is little that crews can do.

“I don’t think they realize the finality of it,” he added. “Especially the younger ones.”

Communication with loved ones is the message Marrelli wants to send.

“Just because everything looks fine from the outside, there is no guarantee that they are not struggling,” he said. “Whether they are 14 or 84, we can’t stop them all. But if we can reduce the number of deaths by talking openly, then we have made a difference.”

There are currently 50 members in the HOPE Squad Coalition. They encourage anyone that has an interest in reducing and preventing suicide in the area to join their fight.

The goal of the HOPE Squad is to raise awareness to suicide prevention by providing education and activities in the community. Some areas in which the HOPE Squad has been involved include kicking off National Suicide Awareness Week in September with a Hope Walk on the Price River Trail. Approximately 50 community members participated.

They also held the inaugural Hope Festival in December, at which 200 community members participated. It included a dinner, Santa for the kids, games and bingo. The HOPE Squad also has a speaker’s group that will come and help businesses and others look at ways they can help their employees before a situation reaches a crisis stage.

The Hope Squad provided suicide statistics for Carbon, Emery, Grand and San Juan counties for 2013. There were 20 confirmed suicides, with 10 in Carbon County alone. Emery County had six. In Utah, suicide is the eighth-leading cause of death in adults. It also ranks as the second cause of death in youth ages 10-17. Utah ranks fifth in the nation for youth suicides and seventh for adults. 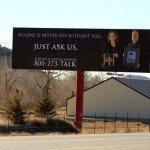 This billboard is located along Highway six, just outside of Helper as you are heading into Price. 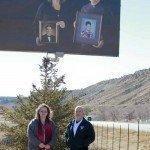 Debbie Turner and Don Marrelli are hoping their message will save at least a few lives by reminding people it is important to reach out and talk about suicide. They want to tell anyone who is thinking of taking their own life, “No one is better off without you.”