Late in the winter, an annual Conference on the status of women’s economic and social status is convened at the United Nations in New York City. It is a gathering of women and men from around the world that focuses on the issues most critical to women.

Price resident Rebecca Mason got an up close and personal look at how issues affecting women are addressed on a global level when she was able to attend a week of sessions at the United Nations as a delegate representing Soroptimist International.

Mason has been part of Soroptimist International of Price for over 14 years. The SI Organization is an international service group that focuses on improving the lives of women and girls. As part of that focus, SI has general consulting status as a non-governmental organization.

Mason was invited to be a delegate at this conference in 2011 and she was interested in taking part in the process again. This time, the delegation was limited to 26 SI members from around the world so she had to submit an application. She was selected and headed off to take part in the first week of a two-week event.

During that week, she had the opportunity to listen to many women talk about the issues women deal with in their countries including access to education, violence against women and gender equality in decision-making processes. While these concerns may vary in how they look around the globe, they are much the same issues women in Carbon and Emery counties contend with as well.

Mason took part in trainings and workshops to help form a plan to take on issues women deal with. SI has taken a stand that an important part of improving the lives of women is to involve men and boys in the effort. Gender stereotypes are as damaging to males as females and it is not an “us against them” problem.

She has brought back to the local community and her Soroptimist International club some fresh ideas about looking at women’s issues. When asked why she wanted to take part in the United Nations processm she said, “It is important to see a broader scope of women’s issues and I want a chance to lend a voice to make an impact on these matters.”

Mason serves on the Soroptimist Rocky Mountain Region board and will be the region governor next year. She is also the director of the Carbon County RSVP and Volunteer Center. Raising both a son and a daughter with her husband Keith, she knows the importance of teaching the value of women to both boys and girls.

She values the message Soroptimist sends, that improving the lives of women and girls also improves the lives of men and boys. 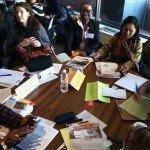 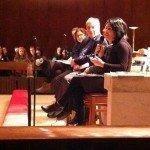 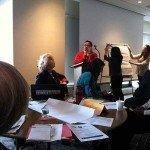