A pilot program aims to breathe new life into the brand of Carbon County thanks to a collaboration between HUB LLC, Corragio Group, the Utah Office of Tourism and the county. The opportunity to “rebrand” Carbon County, specifically in its approach to tourism, is made possible by a pilot program launched by the Utah Office of Tourism (UOT) that will partially fund the process. The Tourism Initiative aims to create destination branding for communities within Utah.

Additional funding will come from the TRT (Transient Room Tax) fund, which must be used for promoting tourism, and not the county’s general fund. The new brand will shift the way the county is promoted not only externally, but internally as well.

Leading the charge of the rebranding will be HUB, an entity that is known locally for its efforts in branding Emery County as “The Swell”. HUB provides a team of strategists, graphic designers and visionaries, three of which recently visited Carbon County, to develop effective and cohesive branding and strategy.

As defined by HUB, a brand is “a visual and conceptual system that represents the identity of a person, place or thing” while a strategy is “the development of a plan of action for a brand to successfully achieve its goals.”

The rebranding process took one of its first steps last week as representatives from HUB and the Utah Office of Tourism visited Carbon County. The ongoing process also involves a four-person “strike team,” which provides feedback and ideas, as well as government officials, business leaders and Carbon County Tourism Specialist Tina Henrie. Last week was just the first of many steps that will be taken to rebrand the county in the coming months.

The work began on Tuesday as HUB, UOT and Henrie made their way to Helper to begin their two-day, county-wide tour, visiting with local government, businesses and residents. Highlights in Helper included Balance Rock Eatery, the Helper River Walk, local galleries and the Western Mining and Railroad Museum.

The team then made its way to Price for lunch at Granny J’s (formerly the Main Street Grill) before visiting the USU Eastern Prehistoric Museum and Price City Peace Gardens.

An intermission on the touring ensued as a meeting took place that afternoon. This gathering featured a presentation from HUB on its mission to develop an effective brand for Carbon County that will distinguish its unique geography, attractions and people.

“It’s not about gimmicks,” HUB shared. “It’s about discovering and defining what’s already great about the county.”

According to HUB, a decision needs to be made about which arenas to compete in, such as trying to make a somewhat common attraction bigger and better, and where to differentiate, focusing on something unique to the area.

Representatives from HUB went on to explain that tourism is not just important for visitors, but potentially new residents as well.

Representatives from local government, businesses, education, volunteer organizations and more were present to give their feedback on what makes Carbon County unique. Various exercises organized by HUB aimed to gather insight into the potential Carbon County has to become a destination. The meeting concluded after HUB had gathered countless ideas from those in attendance before the exploration of the county continued.

Tuesday’s activities concluded with a tour of Price’s Main Street and dinner at Grogg’s.

On Wednesday morning, the visiting team had another busy day as tours stretched from Wellington to East Carbon. The visitors were treated to breakfast at the Outlaw Cafe in Wellington before a morning drive through 9-Mile Canyon.  East Carbon was next on the agenda with lunch at Juice’s Burger Bar and a tour of the Bo Huff Museum, the local coke ovens, Viking Park and more.

Throughout the two days, HUB and the participating parties took time to visit with local residents, asking questions on their perspective of Carbon County. Inquiries ranged from residents’ favorite social activities to businesses, people and attractions.

The information gathered throughout the two days will be taken back to HUB for the next step in the process. The team will work to develop branding and strategy ideas for the county. Ideas will be adjusted and molded until it is deemed the right fit, a process that will take several months.

Also in the coming months, the Corragio Group will become more involved with the rebranding. Contracted through the state for the pilot, the Corragio Group will work on destination development and implementation strategy. Representatives will work with a local seven-person planning team, members of which were chosen by the Carbon County Office of Tourism and the Community Economic Council, throughout the process.

The Corragio Group will kick off its portion of the program with an immersion webinar in February. Representatives will then visit Carbon County in March to help solidify potential strategies. 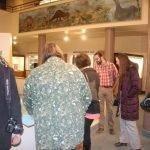 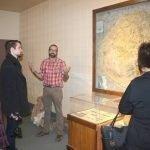 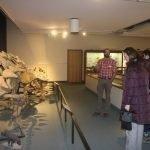 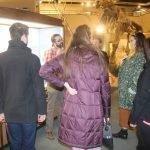 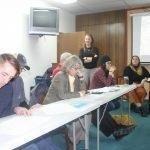 Members of the community write down their ideas for making Carbon County a destination. 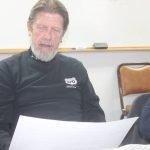 Price City Councilman Layne Miller takes part in an exercise during a meeting for the rebranding of Carbon County. 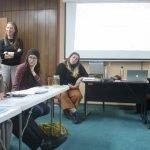 Representatives from HUB hear ideas for local residents about the potential of Carbon County.