The Carbon School District (CSD) board meeting opened on Wednesday evening with a special presentation from the CARE Coalition. Kobi Prettyman of the coalition spoke to the board and audience, stating that the local PTAs teamed up with the CARE Coalition to host a poster and essay competition in conjunction with Red Ribbon Week.

Prettyman called the students present up to the podium to hold their posters and show them off. There were five poster winners and an essay winner. Though the essay winner was not present at the meeting, Prettyman read her essay to the crowd.

Those honored, who were winners for the entire district, were presented with passes to the Desert Wave Pool that will be available for use for their entire family. 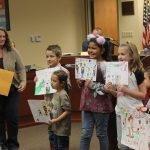 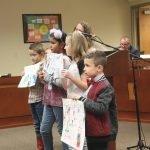 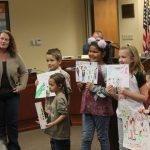