Utah Senator Scott Sandall began the hearing by stating that the committee was happy to be in Price before welcoming Representative Christine Watkins to speak. She welcomed the committee members to her district, as she is the representative for District 69.

Following this, a brief explanation on redistricting was given. It was stated that redistricting is prudent as unequal population growth creates inequities. In addition, the Utah constitution, article IX, section one, requires it.

Redistricting is the process of redrawing new boundaries and the legislature is responsible for that. Target population comes when taking the resident population, dividing it by four and yielding a product number, which is the target district for congressional seats. States must draw congressional districts with populations as close to perfect equality as possible; however, the Utah Constitution allows there to be a legal variance in the numbers of -5% to +5%.

According to an earlier report by Representative Carl Albrecht, District 70, after the US Census is taken every decade, it becomes the job of the states to redistrict. This includes the congressional seats (four), the State House of Representatives (71), the State Senators (29) and the State School Board seats (15).

According to Albrecht, Utah would have needed an additional population of 136,978 to receive an another Congressional seat.

Criteria for congressional maps is that the congressional districts must be nearly as equal as practical. For the others, the vote of any citizen must be approximately equal in weight to that of any other citizen in the state. Sen. Sandall then thanked the host and the staff for all that they have accomplished.

It was stated that the purpose of the hearing was to receive input and make it as convenient for citizens as possible. The meeting was also streamed on Zoom and was recorded for those that were unable to physically attend.

“We want your input,” stated Sen. Sandall. “We value your input.”

The time was then turned to the public for comment. The first speaker was Emery County Commissioner Kent Wilson. He stated that as he has been engaged on the state level with many rural commissioners, one of the things he often hears is a complaint on the rural voice in state legislature getting minimized more and more.

The majority of the population of Utah lives on the Wastach Front, acknowledged Commissioner Wilson; however, in rural Utah, there are still many issues.

“We feel like we don’t have a voice that is strong in the legislature,” said Commissioner Wilson. He asked that this be taken into consideration for any county that’s voice may not be heard.

Following this, local teacher and counselor Chelsea Roberts spoke, thanking the committee for visiting and expressing appreciation of their time and effort to gain the perspective of those in Carbon County.

She then said that she would like to urge the committee to think about redistricting from the perspective of the schools and school district. She has resided in Price for 19 years. Twelve of those years were spent teaching English and health before becoming an elementary school counselor.

Roberts stated that the Carbon School District has a changing dynamic with family structures and there are a lot of children that are being raised by family members instead of their parents. This, according to Roberts, is causing a lot of hardships on local children.

Roberts said that she would like to see school board representation that would represent rural school districts and better meet the needs of rural communities.

The hearing in Price was just one of nearly 20 that will be hosted throughout the state to gather input on the proposed boundary changes for the districts. An independent commission has been appointed to draw boundary maps and make recommendations to the Utah Legislature.

“Once a map has been determined, there will be a Special Session of the Legislature, probably mid-November, to determine the final map for the new district boundaries,” shared Rep. Albrecht.

Rep. Albrecht said that rural districts will more than likely grow in size, as the majority of population growth has been on the Wasatch Front. “I also do not want to see any rural districts eliminated,” Albrecht said. “In rural Utah, we already are at a disadvantage on numbers of legislators.” 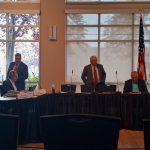 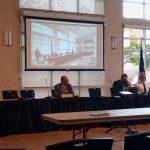 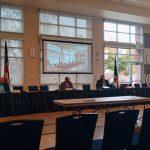 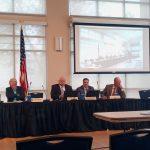