Second place speller Jordan Clinger, 7th grader from ARL Middle School in Blanding, gave James quite a run for his money as they went head to head for 8 rounds.  Jordan misspelled “ameliorate.” At this point James correctly spelled “Fahrenheit” and finally the championship word “efficacy.”

Sponsored by the Southeast Education Service Center, this year’s Region Bee was held at Green River High.  Thanks to Rachel Lund from USU Eastern, who was this year’s pronouncer.  Theresa Wilson and Johnna Boyack served as judges. The Region Bee is a preliminary competition in the Scripps National Spelling Bee held during Bee Week May 22–May 27, 2016 in Washington D.C.

The top three District spellers, plus Pinnacle Academy, grades 4 through 8 advanced to the Region Bee from bees held in their local schools and districts earlier this year.

The Scripps Bee is the nation’s largest and longest-running educational promotion, administered on a not-for-profit basis by The E.W. Scripps Company and Kindle, which has now joined as presenting sponsor. The Bee’s purpose is to help students improve their spelling, increase their vocabularies, learn concepts, and develop correct English usage that will help them all their lives.

Nine newspapers collaborated to start the National Spelling Bee in 1925. In 1941, Scripps took over sponsorship of the National Spelling Bee. However, there was no Scripps National Spelling Bee during the war years of 1943–45. Five times in the history of the Scripps Bee co-winners were announced. In 2014 Sriram Hathwar, New York, and Ansun Sujoe, Ft. Worth, spelled “feuilleton” and “stichomythia.” These were the first co-winners since 1962. Amazingly in 2015, Vanya Shivashankar, Kansas, and Gokul Venkatachalam, Missouri, were named cowinners spelling “scherenschnitte” and “nunatak.”

Congratulations to all those spellers who competed and best wishes to James on his second trip to compete in the National Spelling this year! 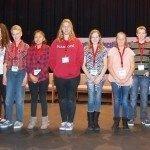