Students and family members from schools throughout Carbon County gathered at Mont Harmon Middle School on Thursday to find out who the best spellers were during the district spelling bee.

Individual schools have been hard at work choosing students that would compete in the district bee, hosting individual bees at each respective school. Then, 21 hopefuls took to the stage for the district competition.

While there was great competition and many words to spell, the numbers slowly dwindled until just three were left standing triumphant over all the rest.

In first place was Jared Saccomanno of Helper Middle School. Second place was awarded to Chloe Garvin of Castle Heights Elementary and Josiah Trostle of Mont Harmon rounded out the top spots in third place.

These students will now study up again as they prepare for the regional competition that is slated to take place in March in Moab. 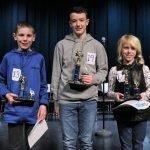 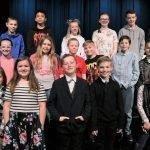