Most fourth and seventh grade students get their experience about Utah History from classroom materials, textbooks and internet resources. While these are good ways to learn, a hands-on experience in education is important too.

That was the goal of a Mountain Man Rendezvous that was held at the North Springs Recreation Area on Friday. School buses full of students studying Utah history descended on the area to learn first hand about one of the very earliest periods of Utah history concerning European and white Americans who poked their way into the wilderness that existed in Utah at the time.

The event, organized by Paul and Karen Bedont, was a chance for students to see what life was like in the pre-pioneer days of the state.

A lodge (teepee), where Christine Johnson presented early American lore and showed the students the meaning of the lodge;

A short presentation on Mountain Man trappers and trading given by Paul Bedont;

A food stand where beans and corn were served along with scones which were made by Jared Chiara, who cooked the main course based on the writings of Lewis and Clark;

A blackpowder/muzzleloader display given by Mark Bunnell as he demonstrated how firearms were different from those manufactured today;

A table where different kinds of animal furs were displayed as well as touched by the students. Brent Stettler of the Division of Wildlife Resources worked with students in that station.

The students also got the chance to play some American Indian games as well as participate in some early settler games while being guided by Angela Paskett.

There was also a traders tent where students could get very inexpensive items such as hats, beads and other items that was operated by Tracy Bedont.

In the morning, a special presentation took place when Wes Thompson and Carbon District Superintendent Steve Carlsen provided western music for the event.

Students liked a lot of the displays and demonstrations as they cheered and talked amongst themselves about some of the things they saw as they went from station to station. The traders tent filled with students who wanted something to take home to remember the day.

“It was great fun putting on the event and I think the students learned a lot,” said Karen Bedont, who is also the assistant principal at Mont Harmon Middle School.

There are plans to do a similar event next year. 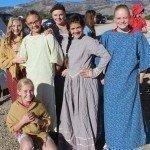 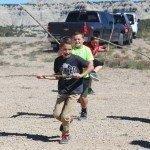 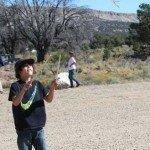 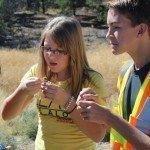 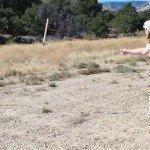 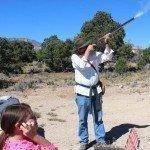 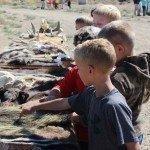 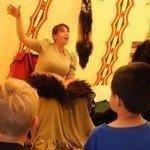 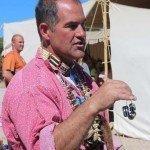