The third week of the legislative session continues to be eventful. Many important bills came to the House Floor this week, where I and other legislators debated and considered their impacts on Utah’s citizens.

On Monday, Representative Sandra Hollins presented HJR 8 to the House. This bill removed from the Utah Constitution an outdated provision in that allowed slavery or indentured servitude as “a punishment for crime.” I happily voted for this resolution and joined the House in a standing ovation at its unanimous passing. It will now go to the Senate and, if passed there, will appear on the 2020 election ballot for citizen approval.

On Thursday, we celebrated the 149th anniversary of the first votes legally cast by women in the modern U.S. This was commemorated through a resolution, HCR 16, sponsored by Representative Melissa Ballard. The resolution marked Feb. 14 as Utah Women’s Voter Registration Day and passed unanimously through the house.

The Medicaid Expansion Bill, SB96, made its final pass through the Senate on Monday. It was signed into law that night by Governor Gary Herbert, who said this bill “balances Utah’s sense of compassion and frugality.” This bill will launch partially expanded Medicaid on April 1 and will expand to full coverage should Utah not receive an Affordable Care Act Waiver from the Trump Administration.

The Senate began discussion of a tax cut early on Tuesday. SB 99, sponsored by Senator Wayne Harper, passed the Senate and has moved to the House for discussion. This bill would lower the sales tax rate from 4.7% to 4.45%. Senator Harper stated that this tax cut is separate from the $225 million cut proposed by Governor Herbert in his State of the State address.

On Friday, the House heard a bill sponsored by Representative Karianne Lisonbee that will allow Utah to offer discounted hunting licenses to disabled veterans. The bill passed the House unanimously. Last week, the legislature also had the opportunity to honor Utah’s fallen officers. Their family and friends were recognized on the House and Senate floors. We greatly appreciate the sacrifices of the good citizens who dedicate their lives to the service of our country.

This week, I had the opportunity to present three of my bills on the House Floor. I presented HB175 on Monday. This bill creates a special license plate with proceeds going to support programs to transport veterans to Washington D.C. to visit Veterans’ Memorials with the Honor Flight Program. On Tuesday, I presented HB220, which would allow the Director of the Division of Waste Management and Radiation Control to classify depleted uranium waste at the time of acceptance. I presented HB125 on Wednesday. This bill made a one-word change to code dealing with water diversion applications. All three bills passed the house and will now move to the Senate for consideration. HB296, my Rural Online Working Hubs Bill, will be heard in a House committee this week.

I also had the opportunity to present some bills to committees. HB110, which raises incentives for businesses to hire in rural areas, and HB220, the Radioactive Waste Amendment, were both heard in Senate committees. They both passed through committee and will be heard on the Senate Floor soon. HB78, a bill that requires Federal Designation Requests to be brought to the Natural Resources, Agriculture, and Environment Interim Committee for review, passed through a House committee and will now move to the House Floor.

On Friday, I was able to present a funding request to the Higher Education Appropriations Subcommittee for Career and Technical Education Funding in Eastern Utah. I also presented a request for funding to address wild wolves in Utah. Two weeks ago, I presented requests for funding for the Old Emery Church and the Richfield Mountain Bike Trail System.

I participated this week in the Sportsman Caucus, the Clean Air Policy Board at the request of Speaker Wilson, and the Conservative and Rural Caucuses. Here, we heard presentations about issues in Utah and bills affecting each of these groups, including public lands, rural prosperity and public safety.

It is an honor to represent House District 70. Thank you to those who have reached out to me, and please continue to do so. I appreciate hearing my constituents’ opinions on the important issues that come through the legislature. 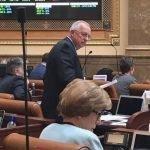 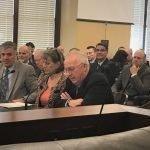 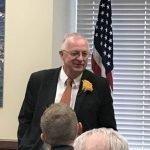 Representative Albrecht talks to a group for FIRM Day on the Hill.