The legislature concluded its work Thursday at the stroke of midnight. 451 bills and 56 resolutions were passed during the 45 days of the legislature. The session started out slow and ended up with the Coronavirus affecting our last few days. Doors that are always locked or closed were open so we didn’t have to touch them and disinfectant hand sanitizer was everywhere! The legislature allocated $24 million for responding to the Coronavirus.

I was asked to attend numerous meetings to talk about the session, but every one of them has been cancelled. We are staying home and hoping to not get infected or spread the virus. As of this writing, there is no one in Carbon or Emery that has been identified as being infected.

The overall budget ended up being a bit over 20 billion dollars. Education was given 6% for the WPU and public employees were given a 3% COLA with another 2% for people in high turnover jobs, like guards at the prison, and higher ed got a 2.5% COLA. There are many other budget items, but they are too numerous for me to write here. The education community came together with a new package for funding education and leaving more money for the general fund. The public will be voting on it in November, so you will learn more.

I passed three bills and had one voted down and I put one on hold. The bills that passed were HB 129 Natural Gas Amendments, HB137S01 Child Placement Background Check Limits, and HB365S03 Child Abuse and Endangerment Amendments. I have several that were written in the last days of the session, so I will reintroduce them next session. I was not successful in getting money for housing, but I know exactly what I need to do next year to get it. But, if you are a veteran who is a first-time home buyer, Workforce Services has a program that received an additional $500,000 this session. It’s called the Veteran First-Time Buyer Program and you can get a $5,000 rebate to help with purchasing your first home. This is for any veteran, male or female, young or old, who is going to buy their first home.

There was not anywhere near enough money in most sub-appropriation committees, so the $3 million request for transitional housing was not appropriated. I did get funding for a three-year rural leadership training to be done by Southern Utah University. The yearlong leadership training will be done with cohorts of rural elected officials. It looks like a great program and I had help from the Association of Counties.

SB95, a bill for rural economic development, passed. There were two of us who did not vote for it. The bill will give a lot of money to counties to apply for grants to help their counties. I didn’t like it because it takes away several rural programs that were very successful in my district. I was also one of two who voted against a bill that would allow a certain group of state employees who work on Capitol Hill to have three weeks of paid maternity leave. $500,000 was allocated for this maternity leave and I felt that it was not a good way to be spending state funds.

We will most likely be called back in a few months for a special session to deal with the effects coronavirus has on our 2020-21 budget. Please follow all of the great advice as to how to not get ill. Thanks for the opportunity to serve you. 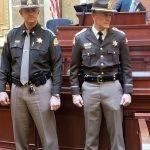 On the last day of the session, Colonel Michael Rapich, director of the Utah Highway Patrol and a native of Green River City, was recognized. Also acknowledged was Colonel Zesinger.