A large crowd of Emery County Republicans welcomed the entire group of candidates running for Governor of Utah at the annual Lincoln Day Dinner Wednesday evening. The dinner, catered by Kent and Julie Wilson, was hosted by Emery County Republican Chairman Tom Hansen. Following the welcome, invocation and Pledge of Allegiance, the Emery High Madrigal Group sang the National Anthem.

The keynote speaker of the evening was Mike Mower, Governor Gary Herbert’s Deputy Chief of Staff. Mower, a graduate of Emery High, spoke of his love for the county and good news coming to the area. That good news was that the coal fired power plants have longer lives than previously reported.

Mower then asked the county party members to do three things: 1. Cheer on local elected legislators and county commissioners as they are working hard to build economic developments for the area. 2. Become a missionary for economic development by inviting family and friends to consider doing their jobs in Emery County if at all possible. He reported that 23 positions in state government were being done remotely in rural Utah. 3. Vote for Donald Trump and keep republicans in control both on the state and national level.

Mower remarked, “Can you imagine the war on coal, oil, monuments and renewable energy if a democratic socialist was to become our nation’s leader?”

Six candidates for governor then spent a few minutes introducing themselves and their platforms to the assembled group. Aimee Winder Newton, a four-generation Utah native, stated she was a fiscal conservative standing for local control.

Thomas Wright, a former Utah State Republican Chair, stated that Utah needs a new face in state government. He feels that the state’s spending and priorities are going in opposite directions. Wright also pledged support to rural Utah.

Spencer Cox was busy on the hill so his wife, Abby, represented him to the group. She reminded all about the time they spent in the county this summer doing service and meeting the people from Emery to Elmo. She said they were part of Emery County because they just live over the hill.

Jeff Burningham was represented by his campaign manager, who described Burningham as a politically unentangled candidate. He stated that Burningham has three points he emphasizes, including education reform, economic development and access to public lands.

Greg Hughes announced he made a mistake when he first came to Emery County, but he learned a lot about the county at that time. He came for a town hall meeting on a Friday evening when everyone was at a basketball game, so he went to the game. There, he found out what a close knit and caring community Emery County is. Hughes pointed out that Emery County has the road and rails for development.

Jon Huntsman said he would not sell himself like a can of soup. He cautioned to not take the freedom of assembly for granted and that his service in Russia and Asia has taught him to value what we have here. Hunstman also said the hardest thing he did while serving as governor was to try to give hope to the survivors of the Crandall Canyon Mine Disaster in 2007. It taught him courage, resilience and compassion.

County officials, including Commissioner Wilson and Interm Treasurer Josie Stilson, spoke about their jobs serving the county. Commissioner Wilson represented Commissioner Lynn Sitterud, who was at the legislature working to secure funding to complete the San Rafael Research Center. Stilson stated that she was appointed interm treasurer in October 2018 and will be running for the newly-formed, combined office of treasurer/recorder.

Joel Hatch Jensen then spoke for Congressman Carl Albrecht, who was also working at the Capitol for the legislative session. She said that Albrecht understands Emery County and protects water and lands and responds to requests. “He is really one of us,” she complimented him. 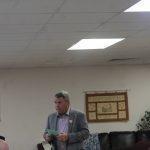 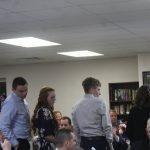 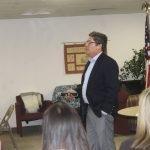 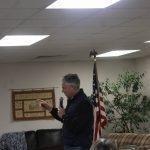 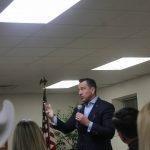 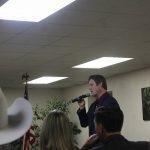 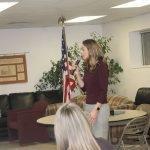 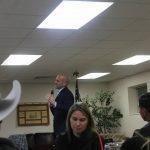 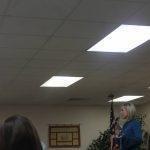 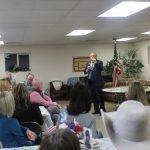