With the results calculated from a recent survey obtained by the Carbon County Sheriff’s Department, residents in the Castle Valley may be surprised to find what is traveling through their communities while they sleep

When we think of a community emergency we naturally consider В earthquakes, floods, wildfires;=however do you wonder what hazardous materials travel through our towns, and if our emergency crews would be prepared should an accident occur?

The Carbon County Sheriff’s Office and various other county agencies were stationed at the Peerless Port of Entry in Price Canyon on September 6, observing and documenting what materials travel our local highways. В Jason Llewellyn, Emergency Services Director for Carbon County, said this survey is completed every three to five years.

“This survey is required every five years. We try to have it completed every three to five years, but due to budget constraints, this is the first in seven.”

The purpose of the County Hazardous Materials Traffic Survey is to track, and document what specific materials pass through the county. For one 24-hour period local entities stop every commercial vehicle driver and motor carrier company to enter В port and ask В questions regarding what they are transporting.

If the vehicle is carrying a hazardous material , the following answers are obtained:

-what materials are transported?

– The amount of the material in pounds

-The container in which the material is transported: box trailer, cargo tank, flatbed

– Is the vehicle placarded ( The danger level of hazardous material, represented by a number and a symbol)

After the 24-hour survey results have been obtained, they are submitted to the Local Emergency Planning Commission (LEPC) to reveal what materials would present the most probable threat . Once the county received the results, the information В determines how our local Hazmat crews will be trained.

“It tells us you have ‘x’ amount of a chemical passing through and this is how often, and how many trucks are carrying it, so we can prepare not only our hazmat team but all of our responders,” Llewellyn said. “It allows us to better prepare so if one of the chemicals does spill we can deal with it a little faster, and a little better.”

Carbon County Sheriff’s Department, Hazmat, State Fire Marshall’s Office, and Helper Police were all involved in the process and the results have now been reviewed; over 5,000,086lbs of hazardous material passed through. Llewellyn said they were surprised with the results of the survey.

” Over 1,560 commercial vehicles passed through port in that 24-hour period,” Llewellyn reported at the Carbon County Commission meeting Wednesday night, ” and 63 of them had no idea what they were transporting.”

This has been determined as a high number, and potentially dangerous if an accident were to occur. What was also interesting was about half of the driver’s surveyed spoke English, the other half were of Eastern European decent, most speaking Russian, and not able to communicate well.

” Those that did not speak English made it very difficult to complete the survey, it was apparent В this would be dangerous if В there were to be an accident,” Llewellyn said.

From the results of the study, the Carbon County Emergency Preparedness team will have translators on-call who can speak numerous languages, so in the event of an emergency the team will be able to communicate fluently with the driver. 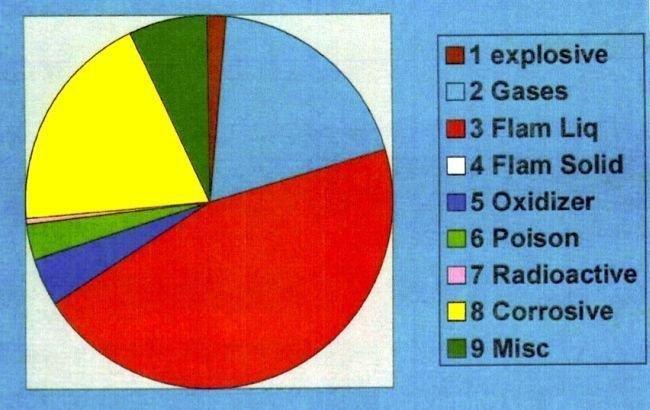