The Emery County Commission meeting on Sept. 20 began with a public hearing to receive comments regarding proposed zoning changes for land around and adjacent to the San Rafael Energy Research Center.

Citizens from Orangeville, including most of the Orangeville City Council, were in attendance with questions regarding the zoning change. Some of their concerns revolved around hazardous materials at the center and how far the industrial zone would extend. They continued with concerns over fences, road safety and even the possibility of annexation into Orangeville City.

Commissioner Lynn Sitterud replied to these questions with the assurance that all these concerns have been taken into consideration with the center and essentially nothing would change with the industrial rezoning. He also replied that owners of all surrounding parcels of land have been contacted to see if they would like to be rezoned.

This issue will also be discussed at the next commission meeting, which is on Oct. 4 at 3 p.m. At that time, action will be taken by the commissioners.

After returning to the regular meeting, Emery County Road Department Safety Coordinator and Sign Manager Thad Morris gave the safety minute presentation. He spoke about sun exposure and some of the precautions needed to prevent harmful effects. He stated that a little bit of sun is beneficial, but too much can be detrimental. In fact, extended exposure could even cause skin cancer.

A ratification to cover a $35 charge for part-time employees and EMTs for flu shots at the upcoming wellness clinic was given. The annual Justice Assistance Formula (JAG) Block Grant Application for the sheriff’s office was also ratified. Deri Thatcher then requested funding support to attend the national Future Farmers of America convention later this fall. She was given $250 by the commission.

The Board of Equalizations for 2022 was closed and the changes recommended were approved. Veteran, blind and homeowners tax credit abatements were also approved.

Next, a purchase order between Emery County and Unified Fleet Services covering the leasing of vehicles for the sheriff’s office was approved. In the past three years, it has been more economical to lease than buy. Recently written bylaws for the Emery County Council of Governments (COG) were also approved.

Two small parcels of land owned by the county will be disposed of and the process of beginning advertisement was approved by the commissioners. One parcel is on Cedar Mountain and surrounded by Bureau of Land Management grounds. The other is a small strip of land behind the Huntington Fire Station, partially owned by Huntington City.

Payment in Lieu of Taxes (PILT) money received for 2021 will be transferred to the EMS and San Rafael Energy Research Special Service Districts. This amount was $327,140.

During the elected officials’ reports, the time was given to the Lance Porter, BLM District Manager, and Kyle Beagley, Price Office Manager. They presented the conveyance patents to the commissioners for the land parcel designated in the Dingell Act legislation. 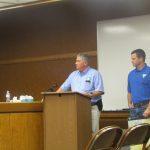 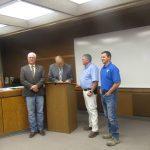 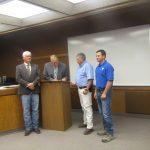