An Emery woman is lucky to have escaped serious injury when her car left SR10 in Ferron and ended up in Ferron Creek. The accident occurred on Nov. 12 at 4:30 p.m.

A female juvenile was riding a motorcycle to a friend’s house and witnessed the car plunge into the creek. When she got to her friend’s house, she reported the accident to her friend’s father, Andy Deto, who just happens to be a volunteer firefighter with the Ferron Fire Department. Deto immediately went to the scene and notified ECSO dispatch. ECSO personnel were dispatched, along with Ferron Fire Department, Ferron Ambulance and Utah Highway Patrol.

ECSO Deputy Boe Minchey was just four blocks away when he was dispatched and was on scene in a matter of seconds. Deto was already in the river. Minchey jumped the fence to assist. Deto broke out the window and Minchey returned to his patrol vehicle for a C-collar to stabilize the woman. UDOT employee Jeremy Larsen was passing by and also entered the creek to help. Rescuers were in waist-deep, freezing water. The woman was extricated and transported to Castleview Hospital by ambulance complaining of chest and back pain.

It is interesting to note that the vehicle was not visible from the roadway and could have gone undetected for a long time had it not been for the juvenile witnessing the accident. Others responding from ECSO were Sgt. Brook Smith, Deputy Shaun Bell and Deputy Jeff Weber. UHP did the accident investigation and report. Another successful rescue thanks to the RIGHT PEOPLE – RIGHT PLACE – RIGHT TIME. 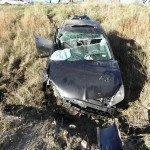 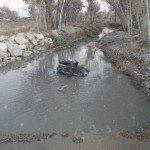 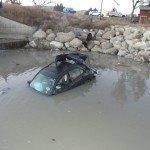