Robbie Mitchell took to the track once again this past weekend to compete in the National Hare and Hound (NHAH) race at Jericho. After four long hours on the track, Mitchell found victory at the finish line.

“I had a great start,” Mitchell explained. “The Lindsay Machine Racing, LLC engine fired on the first kick, the DWT tires hooked up and I got the holeshot.”

This feat was impressive for the racer who wasn’t even planning on competing in the race. Mitchell decided the morning of the race that he was going to go for it.

“I got my good friend Kurt to sign me up since I would be there when sign up was supposed to close,” he said.

Racing on a whim proved beneficial for Mitchell as he beat other racers by a large margin and took home the win. 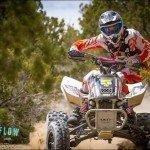