Robbie Mitchell traveled to Lake Havasu, AZ for a WORCS race on March 16. After a fast start and a shaky middle, Mitchell finished the race with a respectable fifth place.

The race began with a dead engine start. The racers got to the line, waited for the green flag from the official, started their engines and battled for the holeshot. Mitchell’s quad started in half a kick, allowing him the quick start that led him to the holeshot.

The racer led for 3 1/2 laps before making a small mistake, dropping him to third. After getting stuck on a berm, Mitchell dropped to fifth. A few laps later, he started to overheat in the 90 degree weather, dropping to sixth before stopping in the pit to strip some clothes and cool off. Determined to finish, Mitchell got back in the race, finishing in fifth and setting him fourth in points for the series.

According to Mitchell, he is looking for redemption at his next race, which will take place in Sand Hollow State Park on April 13. Until that time, he plans to continue to practice and maintain his bike.

What many may not know is that Mitchell, with some help from his dad, is his own mechanic. While others in the WORCS series employ professional mechanics, Mitchell maintains his 2005 quad himself, buying and installing new parts as needed. 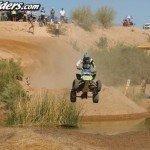 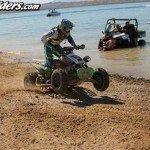 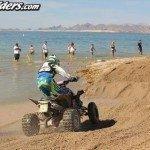