Emery County welcomed one of its own to the auditorium at Emery High on Monday evening: Ryan Stream. He performed for the middle school and high school students during the day before addressing a large crowd that evening with music and words. Stream was introduced by the Miss Emery County Royalty and his opening act was his associate, Travis Richey.

Richey spoke to the crowd about his road to recovery after spending time incarcerated. He focused on the importance of mind set and changing things that one can control. Richey stated that you can change your destiny and that sometimes things have to fall apart to fall into place.

He emphasized that you have the power to change yourself and that most success requires failure along the way. Richey operates a business called Accomplished Ventures, an entrepreneurial program that educates the underserved.

Stream then took to the stage in front of a screen as the setting for his discussion and musical presentations. He told his life story, which included a rough childhood, before he was eventually adopted by Steve and Carol Ann Stream of Huntington.

He spent a long time finding himself and abusing drugs, experiencing homelessness and many other challenges. After serving in Afghanistan twice and marrying, he began composing songs and sharing his newfound success with others across the nation.

Stream challenged others to make good choices, have high standards and treat women with respect. He said, “Shortest men climb the highest walls.”

Currently, Stream is writing a book, “A Few Bad Chapters Doesn’t Mean Your Life is Over.” He has certainly overcome insecurities to reach where he is today. 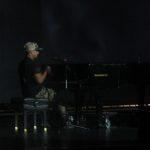 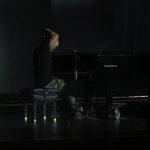 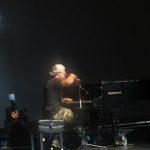 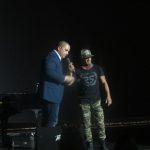