Friends and family of students at Sally Mauro Elementary School gathered together on Wednesday to test some of the kids’ smarts in an annual constitution bee. It is much like a spelling bee and was hosted by the members of the Lions Club. The gentlemen of the club took turns asking each student a question about the Constitution, and in typical fashion of a spelling bee and similar competitions, students were slowly eliminated until a lone student remained.

The competing students were Daron Garner, Kinley Cowdell, Ian Kranendonk, Daisy Maue, Tamara Sosa and Jared Saccomanno. Each student showed a great knowledge of American history. First place went to Jared Saccomanno, second place to Kinley Cowdell and coming in at third was Ian Kranendonk. Each student was awarded a cash prize, with the first place student getting the most. The Constitution Bee will be hosted at all the surrounding elementary schools in Carbon School District in the near future. 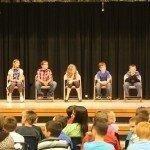 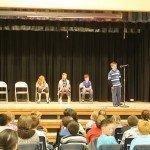 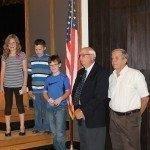