Next, the men sang an African-American slave song “Follow the Drinking Gourd,” which tells the story of slaves making their way to the underground railroad. Their last song was “LaMusica.” The seventh grade chorus sang “The Ghost Ship,” which is a collection of songs from “Reflections of a Lad at Sea.”

The men’s next number was “Joy Inside,” which featured percussionists Jesse Braun, Austin Albrecht, Ethan Anderson and Connor Cramer. Two lively numbers, “Song of the River” and “Climbin’ Up the Mountain” finished their performance. The latter featured Korinne Behling as soloist.

The women’s choir sang “Clap Your Hands and Sing!” followed by a Korean folk song “The Hills of Arirang.” “Hush, Somebody’s Calling My Name” is an African slave song that concluded the women’s choir section for the evening. Eighth and ninth grade combined choir began by singing “This is opera, we have come to get you prepared,” part of “Painless Opera.”

Soloists were September Fausett, Amy Deto, Brynne Urie and Rebecca Barney, with Micah Bennion on the anvil. A Latin piece “Pie’Jesu” and “What a Wonderful World” were performed next. A Zambian folk song “Bonse Aba” was the final number with Braun and Austin Albrecht on percussion. Next, the ninth grade girls and boys each sang a song of their choice, with Braun on guitar and Tyson Stilson conducting the boys’ choir.

All choirs combined for the final two numbers of the evening, “Stitches” with soloists Sean Kelsey and Sophie Huntington, Kaydee Deto and Brock Winter, and “Irish Friendship Wish.”

The evening was lively and fun for the audience as well as participants. 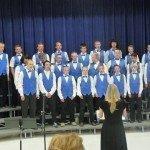 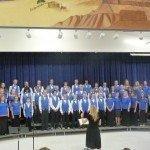 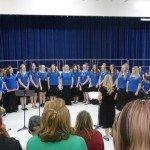