San Rafael Middle School scheduled its spring band and choir concerts on the same evening, one following the other. Mr. Ben Carroll, conductor, led both to an evening of music for parents and guests. The choir concert featured sixth, seventh and eighth grade choirs as well as a girls’ and boys’ choir. Instructor Carroll announced the success of the choir at a recent festival, stating that the students received very high scores.

The conductor also presented plaques to students who received honorable mention for their solos at the festival, including Kina Jewkes and Byron Christiansen. Dallin Braun was also given recognition and a plaque for outstanding soloist at the recent festival competition. The students presented Mrs. Elizabeth Fuller a basket of flowers to show their appreciation for the many hours she has spent accompanying them on the piano.

Following the choir concert, everyone moved to the auditorium for the spring band concert. Once again sixth, seventh and eighth grade bands each performed a number of pieces. These bands had received straight superior ratings at the festival and plaques were presented to Danielle Wolford and Samuel Neff for their achievements at the festival. 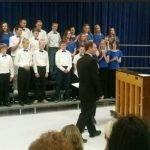 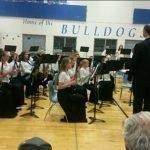