This month, the honor went to Sandi Regruto of the Children’s Justice Center. Shelley Wright and Brenda Pappas presented the award with Barnes, taking time to highlight Regruto’s work ethic and her accomplishments leading up to the recognition. Regruto has been an employee of the center for five years and started as the program coordinator. Pappas nominated Regruto following her earning her Masters Degree in January.

With this degree, Regruto became the therapist for the Justice Center and is handling multiple areas as well. She is known for always being a great support for all of the center.

Regruto is booked with many clients and Pappas remarked that she can already tell a difference in one family that she referred to her. Wright spoke on Regruto as well, stating that she likes to wear multiple hats and is continuing her old position of program coordinator until they find her replacement.

“She is keeping the Children’s Justice Center afloat while we are in transition,” Wright stated.

Wright then thanked Regruto for her hard work and, in turn, thanked Pappas for recognizing and nominating her for the honor. Regruto took a moment to speak, stating that the journey she is on with the center is a great one and she wished to break the barrier of mental health assistance at the center.

Regruto was presented with a commemorative plaque and will hold the title of Employee of the Month through August with her photo on display at the county’s administration building in Price. 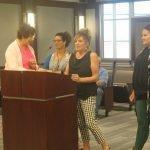 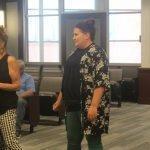