The Utah Division of Wildlife Resources hosted the seventh annual ice fishing tournament at Scofield Reservoir on Dec. 28. Over 300 anglers took to the ice to either participate in the event or to just enjoy a day of fishing.

The winning rainbow trout was caught by James Jones. The fish measured in at 17.12 inches. Matt Tallerico, Cody Hansen, Rob Smith and Matt Brown also placed in the top five with their largest catch.

There were no cutthroat or tiger trouts reeled in during the event. 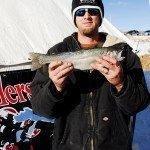 Cody Hansen of Midway displays the 15.87 inch rainbow trout he caught in Scofield. 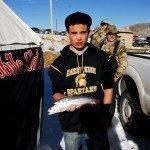 James Jones of Huntington with the 17.12 inch winning trout. 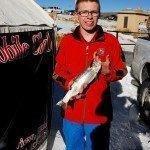 Matt Brown of South Jordan holds the 15.12 inch trout he caught during the ice fishing tournament. 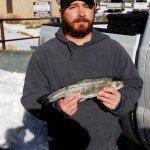 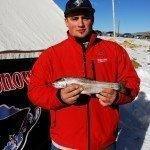 Rob Smith caught a 15.37 inch rainbow trout during the tournament.