An Atlas Van Lines semi truck driver got high centered on the railroad tracks just off of Main Street in Helper Saturday night.

The semi was still there at 9:45 p.m. Because of construction on Main Street, it appeared the semi followed the detour that would have taken it over the tracks.

The semi and its trailer were helped off the tracks by 10 p.m. 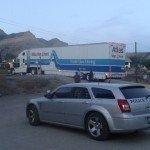 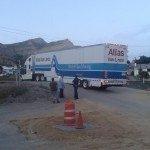