By Julie Johansen and Traci Bishop

Emery County officials gave Senator Mitt Romney and his crew a scenic tour of the desert prior to the town hall meeting at the county administration building in Castle Dale on Saturday afternoon.

Opening the meeting was Emery County Commissioner Gil Conover. Next, Senator David Hinkins introduced Sen. Romney to a large audience. Hinkins, whose area is Southeastern Utah, assured the crowd that Romney is very active in his concerns about Carbon and Emery counties. Sen. Romney introduced himself by telling a few stories about his personal relationships in Washington D.C. He also spoke about the big shoes that he stepped into, being those of former Senator Orrin Hatch.

Romney then began to discuss the Emery County Lands Bill’s protection so that no president could likely make a national monument of the Swell. He concluded that the bill was not 100% satisfactory for everyone and probably never could be. The Emery County Public Lands Council worked out all the possibilities and sent the bill to Congress the best they could for everyone, Romney said. The bill passed the Senate 92-8, meaning that several democrats joined to make it pass.

“It takes 60 votes for any bill to pass, so unless some congressmen cross party lines, nothing can pass,” Romney said. “Now, the legislation goes to the House for a vote, and then to the president for a signature.”

The Senator said he wants to do what is best for Emery County.

Questions from the meeting-goers included road closures, access to various areas, management plans, federal regulations, disability protection and protection from a monument. Sen. Romney assured everyone he is in support of state control of land and multiple use.

“When Utah was made a state, a contract was made with the federal government giving them the rights to the federal land in Utah,” he explained.

Another question from the audience was about his voting against President Donald Trump’s emergency declaration. He responded that he wants a balance of power in government, a checks and balance system provided the creation of the three branches of government. He doesn’t want any president to have that much power or it could mean a total banning of firearms or other drastic measures with future leadership.

These same topics of conversation were presented when Sen. Romney promptly traveled to Carbon County to host his second town hall meeting of the day at the administration building’s commission chambers. The chambers were packed with community members and many county officials were present such as Carbon County Commissioner Larry Jensen, Wellington City Mayor Joan Powell, Price City Mayor Mike Kourianos and more.

Introduced by Carbon County Commissioner Tony Martines with a prayer from Commissioner Jensen and the Pledge of Allegiance, Romney dove right in with his brief history, also touching on the camaraderie that exists within the senate from both sides. Questions from those in the county came in the form of concerns for Trump’s pending wall, the Bureau of Land Management, wilderness study areas, land restrictions and more. 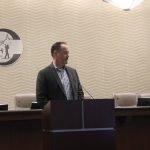 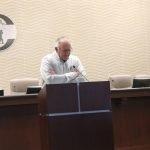 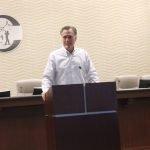 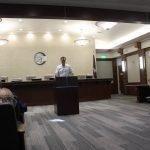 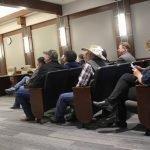 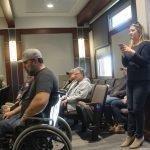 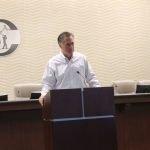 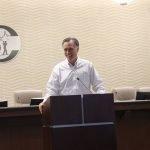 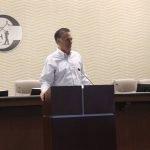 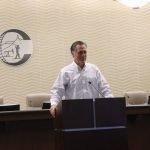