Pictured: Paul Bryner poses for a picture at the week-long event tailored to promoting an awareness of how government works with the rising generation. Photo courtesy of Jed Ryan Morley.

The Utah Boys State program affords young men hands-on experience in issues dealing with government organization and politics. For an entire week, the attendees, who are placed in groups of other boy state members known as “cities,” are put in charge of running the government within their respective cities, elections and towns.

Seven soon-to-be seniors from Carbon High recently attended the event which was hosted at the Weber State University campus the week of June 13.

Jason and Jonas Nielsen, Paul Bryner, Merlin Austin Phillips, Logan Engar, Kody Wells and Jed Ryan Morley all attended the event, which featured speakers, a comic example of a courtroom trial, a political debate and other activities throughout the week.

“I learned a ton,” Morley expressed after he attended the event. Morley was able to participate in the various activities as well as run for several elections and was chosen as a state delegate and county treasurer.

For attending the event, participants not only receive hands-on experience in government, but they also receive college credit for attending that they can use in their educational endeavors. 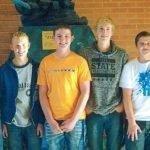