The major topic of discussion at the recent Emery School District Board Meeting concerned the junior high and middle school athletic program.

A request had been made at a previous board meeting to let junior high athletics increase their travel. Topics of concern for the increase coming from some board members included loss of school time for teachers and students, late nights, liability, expense, as well as the coaches’ ability to handle the increase. Other board members expressed their concerns at not granting the increase; i.e., exclusive traveling teams, lack of experience, inability of parents to meet the expenses and time required, and purchasing uniforms that can’t be worn for outside games and tournaments. No decision was reached but discussion was ceased and policies and procedures will be established by the board.

Permission was granted for the Emery High School (EHS) Automotive Program to travel to New Mexico for competition. Melissa Jensen was also approved as the new computer aide at Huntington Elementary. Superintendent Larry Davis introduced capital outlay projects for 2017, which have been reviewed by principals and custodians. These include things such as repairing leaking roofs, replacing worn out coolers, installing carbon monoxide detection systems and security cameras. All projects were approved. The revision of the JICFA policy (bullying and hazing) and water share leases were also approved.

Principal JR Jones of Book Cliff Elementary presented an amended plan for their land trust monies, which included Chrome Book instruction and use at the school. He also thanked the administration for their help and support during the investigation and reconstruction following the burglary at the school. They were also very appreciative of the student council at Green River High for their assistance at this time. He feels that they are making great progress with their turnaround activities and reported that their Christmas break homework packets were a success. Jones also reported that Book Cliff Elementary will have 25 science fair projects at the district science fair.

Green River High School Principal Kayce Fluckey had a large group of students at the meeting representing the student council as a sign of support for activities at their school. She also reported that the block scheduling had a few hiccups but most have been worked out and, with changes, will continue. STEM projects are advancing and she was excited to report that a student’s robot had been awarded the most innovative at a recent competition. She thanked the district for their support and extra efforts to visit Green River schools.

Superintendent Davis announced that they will be hiring a resource aide at Canyon View Junior High and that J.J. Grant will be retiring from the Service Center at the end of June. That position is now being advertised and closes on Feb. 17. The service center serves Carbon, Emery, Grand and San Juan districts.

Registration is in the final stages at the high school for the coming year. Completed staffing decisions for the transition of sixth and ninth grades also begin. District personnel will be considered first and then they will begin to fill in trickle down positions. He also announced that technology monies, $70,000, have finally been received. They are beginning a Drop-out Prevention program that will create a pathway to come back to school for those who have dropped out. 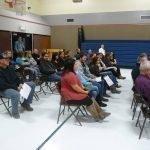