A long-standing goal of those who are familiar with the treasures hidden in Nine Mile Canyon has been to share those treasures with the world. The canyon is becoming more well known, but a trip there to see ruins and rock art is difficult for visitors because locating the sites is a challenge. But, that has begun to change.

New site locations signs were placed at some of the sites this week and others will be added soon, all the result of a unified effort from many directions. “Our goal of installing new signage in the canyon is ultimately to heighten the experience for our visitors while at the same time keeping the sites protected and respected,” explained Carbon County Tourism Specialist Tina Henrie.

The effort to create a better visitor experience in Nine Mile began officially in 1996, but the effort died and was resurrected many times, only to die again. The current effort began last summer when Utah Congressman John Curtis and his staff spent the day getting acquainted with the resources there. During the visit, the idea of placing site location signs within the road right-of-way owned by Carbon County was explored. Following a phone call by the Congressman’s office, approval was obtained and the current effort started.

The signs were created thorough a grant from the Utah Rock Art Research Association, a Utah organization dedicated to increasing education and protection of rock art in Utah.

“URARA is actively engaged in identifying projects we can participate in to help protect petroglyphs and pictographs around the state of Utah,” URARA Conservation and Education Committee Chairman Steve Acerson said. “Nine Mile Canyon has always been a priority for URARA in our efforts to help avoid the theft, vandalism and destruction that plagues these symbols. So, when we were approached about the intention by the county and others to install signs along the areas of the rock art in the canyon and their need for additional funding, we were eager to help.”

Carbon County Commissioner Larry Jensen spearheaded the sign effort for the county, including personally helping install the signs. He expressed his support for improving the visitor experience in the canyon by making the vast history of the canyon available to those making a trip to Carbon County.

Also being developed is a written guide for the canyon and a smart phone app visitors could listen to a narrated, detailed history of the canyon while touring the area.

Through years of effort and by joining hands to protect one of the world-premier rock art locations, Nine Mile Canyon could soon provide a quality visitor experience. 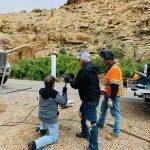 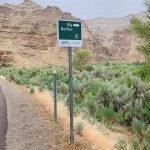 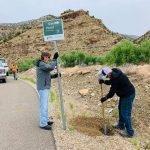