Singleton’s Trailer Park was honored by Ferron City as the Business of the Month during the council meeting on Wednesday. The park, located in the center of town, is operated by Kyle and Kathy Singleton.

Singleton’s Trailer Park was built in 1985 by Kyle’s grandfather, Morris Singleton. It is available for long and short term trailer parking. The city thanked the Singletons for maintaining the business as well as the contribution they make to Ferron City.

The first item on the agenda was then addressed, which involved opening bids for the restrooms at the fairgrounds. Two bids were received, including one from DC Construction for $491,000 and the second from Bailey Builders for $365,000. A motion was made to accept the lower bid and this was passed by the council. It will now be sent to the engineers for approval.

A public hearing was then opened regarding the 2021/22 fiscal year budget. The need to open the budget was to secure the funds to enter into a contract with Great Life for the golf course. The city will decrease the fairgrounds budget by $18,000 and increase the golf course budget by the same amount. There were no comments, so the hearing was closed.

The agreement with Great Life was tentatively approved pending approval from the city’s attorney. A formal motion was made, the contract was signed and a roll call vote approved the action. The mayor commented how excited she is to have this done.

Discussion on helping the county fund law enforcement was next on the agenda. The mayor reported that this is now in crisis mode as deputies are leaving for higher paying jobs. She stated that the current wages are pathetic and the county does not have the money to fund sufficient wage increases.

The considerations for how cities will assist include basing assistance on either the number of calls per city or the population of each city. The council wanted a dollar amount before making any decisions, but council members are in support of the county and agreed to do what is required to assist.

It was then addressed that some citizens have been reporting water issues with either low pressure or dirty water. The citizens recognize that there is construction in the city, but the city said they would troubleshoot any issues. Councilperson Wendy Price will get in touch with the Castle Valley Special Service District for solutions.

Following some discussion, a motion to purchase a new water meter system from Generation 4-Mobile Collector was passed. The cost of a belt buckle in the amount of $175 was also approved to donate to the livestock show.

Councilman Dell Mead then sought the council’s recommendations on animal control enforcement. The fee schedule was discussed as well as pound reimbursement. Unleashed animals seem to the biggest problem for the city as well as unlicensed animals, which are usually the same animals. Mead also suggested a countywide fee schedule would be advantageous.

Next, Ordinance 2021-8 on home occupation businesses was amended and consolidated. The changes include allowing people not living in the home to work there and the size of delivery trucks. These amendments and changes were adopted.

Announcements concluded the meeting. The fire department will host its Christmas party for members on the first Thursday of December, while the lightning of the tree in the Mayor’s Park will be on Nov. 29. Finally, the city employee party for employees and their spouses will be on the Dec. 8 in conjunction with December’s city council meeting. 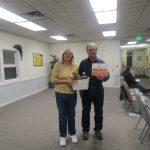 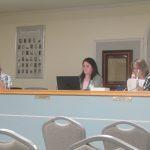