Supporters of the Carbon High soccer teams appeared before the Carbon School Board on March 12 to explain in detail the drastic need for improvements to the school field. Coaches, players and parents all appeared at the meeting in hopes of encouraging the board to consider their proposals.

It was brought to the attention of board members that the current Carbon High soccer field is far from desirable. The land is very uneven and laced with holes and divets and sprinkler heads are raised considerably above the ground. Conditions are so bad that according to Carbon High boy’s soccer coach Keith Palmer, other teams do not want to play on the field.

“There is no such thing as a home field advantage for our kids,” Palmer advised. “The conditions here are unlike anywhere we play. The kids would rather play away than in front of their own families because of the field.”

Recently, interest in soccer has increased dramatically in both Carbon and Emery counties. The Price Youth Soccer Association alone has over 200 participants. With the addition of a college team at USU Eastern, high school coaches feel that the sport will continue to attract athletes.

“This is a sport that athletes can compete for scholarships in,” Palmer explained. “USU wants to give locals scholarships first, but without a proper playing field, these kids don’t stand much of a chance.”

Although a new field would solve the problems, soccer supporters agreed that they would be happy with repairs and improvements. Currently, the field is not even the standard size for high school soccer and injuries are common. “There are teams that laugh at us and refuse to compete against us just because of the field,” Palmer said. “We have had players and referees injured because of the conditions.”

With overwhelming community support, soccer enthusiasts hope that better days are in the near future for Carbon teams. The school board agreed and vowed to look into the matter. Although cost is unclear at this time, district officials feel that this project is worth serious consideration.

In other business, the school board recognized cast members, crew, parents and the community for their role in the success of “The Music Man,” a musical performed by Carbon High drama students last month. School district superintendent Steve Carlsen, commended those in attendance who played a roll in the production. “Everyone did an outstanding job,” he praised. “I was very proud of the musical and the students.”

School officials also discussed orientation activities for upcoming 6-7 and 8-9 grade students. In order to transition the grade realignment, both junior highs and the high school will conduct activities for those directly affected by the change.

On Monday, next year’s 8-9 grade students traveled to Carbon High where they had lunch, toured the building, met teachers and learned about various clubs. Current high school students were released prior to the visitors arrival, giving them the opportunity to enjoy the activity with few distractions.

Mont Harmon conducted a similar event on Wednesday and Thursday, allowing incoming 6-7 grade students the chance to explore the facility. Helper will also host an orientation event next month. 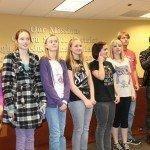 Participants of “The Music Man” was recognized for their work at the Carbon School District Meeting. 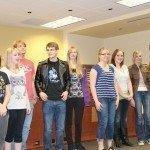 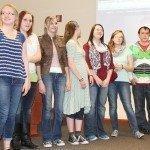 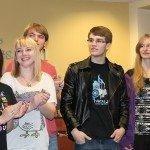 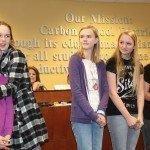 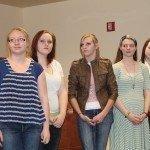 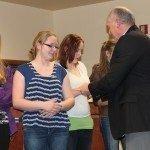