Dog: man’s best friend. Everyone either has a dog, knows a family member or friend with a dog, or has a neighbor with a furry four-legged friend. While dogs are fun friends for the family that owns them, they can be less than friendly to strangers and passersby.

According to the Centers for Disease Control and Prevention (CDC), approximately 4.5 million Americans are bitten by dogs annually. Of these, 50% of bite victims are children and 20% of bites require medical attention.

“We have had a lot of dog bites this year,” Carbon County Animal Services Director Doreen McCourt said regarding the county. “A lot of dogs have been getting out of their yards.”

Many of these bites happen to the dog’s family while playing, touching a dog’s injury or when the dog is sick and does not want to be approached. However, bites often occur when someone is visiting a residence, walking close to a protective dog’s yard or trying to approach an unknown dog.

A Price resident, who wished to remain anonymous, was recently bitten by a dog while tending a family member’s home. When walking in the backyard to do yard work, a neighbor’s dog jumped a fence, charged at the young woman and clamped on to her leg twice before jumping back over the fence and into its own yard.

“I told myself I would not run from him,” she said regarding the incident. “I put one hand on the fence, stood straight up and stuck my leg out so I could kick him in the face if he tried to jump for my leg. He latched on, bit down twice and then let go, thank God. He could have kept attacking me but he let go for some reason.”

She was taken to Castleview Hospital to be treated for the bite. Three hours, six stitches, a tetanus shot and an antibiotics prescription later, she was released from the emergency room.

The victim, who now carries a hefty hospital bill with her, did not have insurance. Not only has she suffered physical and emotional trauma, but also a financial burden. According to dogsbite.org, the average hospital visit for a dog bite is $18,200.

It is an owner’s responsibility to ensure that their dog does not bite. According to the Utah Code Section 18-1-1 “every person owning or keeping a dog shall be liable in damage for injury committed by such dog.”  The code also states that that it does not matter if the dog was previously known to be vicious, the owners are still responsible.

“It is always good to report if a dog bites,” said McCourt. “We want to know what aggressive dogs are out there.”

If a dog bites, the owner could face multiple consequences including a citation, detainment of the dog, compensation for medical bills, McCourt explained. Owners could even be charged with involuntary manslaughter if the dog attack results in death.

“I am glad that it happened to me and not someone’s child,” the bite victim explained. “I hope people just realize how serious dog bites can be and that owners need to keep potentially dangerous animals contained.”

Here are some tips to keeping your dog and others safe: 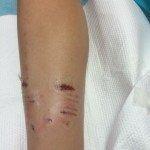 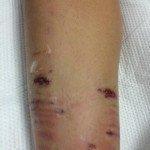 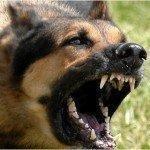