Local community members protest outside the 7th District Court Building Monday morning before Sorenson’s sentence was reviewed by the court.

Not 24 hours after Bart Sorenson was sentenced for 16 counts of forcible sexual abuse, members of the Castle County community gathered together to let their voices be heard in what they felt was a moment of injustice.

Sorenson was sentenced to the maximum allowance of one to fifteen years for each count in the Utah State Prison.

Seventh District Court Judge George Harmond then suspended the sentence given a successful completion of probation lasting 36 months, with nine months served in jail with a possibility of working from jail left to the sheriff’s discretion. Other conditions were also imposed at the time including participating in treatment and not having contact with any children under the age of 18 without needed permission, among others.

Feeling that justice had been slighted in the case, local community members recently created a petition, requesting that the suspension be revoked.

However, the act has left others in the area wondering if such a petition could truly change the verdict.

After talking with an official from the Carbon County Attorney’s Office, it appears that the answer may be different than what one may think.

According to one official, while such acts are a demonstration of the freedom of speech, the general principle is that after a judge passes a valid, legal sentence, the judge loses jurisdiction over the case and is sent to such entities as Adult Probation & Parole or the Department of Corrections, among others.

There are cases, however, where changes may be made by appealing to the Court of Appeals on the behalf of the defendant, the Board of Pardons and Parole, or AP&P.

Besides a petition, a peaceful protest took place before Sorenson’s next appearance, where his sentence was reviewed for further recommendations by the Utah Department of Corrections.

During the proceedings, the state concurred with the department’s 13 recommended conditions while Sorenson’s attorney, David Allred, said that he felt they were “appropriate.”

The court then sentenced the additional conditions, with Judge Harmond noting that some were duplicates of previously sentenced conditions. Sorenson’s probation officer will review the conditions with him at a later time.

Sorenson asked about contact with his wife, upon which the court responded that the new conditions do not alter the restrictions on communication previously set.

Emery County Sheriff Greg Funk also was present, stating that he would not allow a work release for Sorenson from the Emery County Jail.

Judge Harmond responded that he, as judge, cannot issue a work release from jail and had previously made such sentiments known. 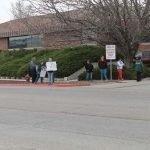 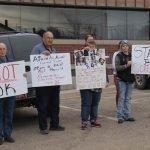 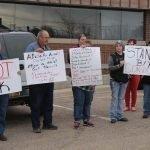 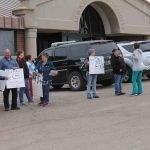 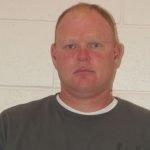