The Southeast Utah Health Department announced five new cases of COVID-19 within the region on Monday evening. The cases include four in Carbon County as well as one in Emery County.

Since testing began, 194 patients have tested positive out of 11,073 tests administered throughout Carbon, Emery and Grand counties. Of these, 175 patients have recovered and 18 cases remain active.

Carbon County has tallied 109 cases with 94 recoveries, leaving 15 active cases. While no patients are currently hospitalized due to the virus, four were formerly hospitalized. There have been no deaths attributed to COVID-19 in Carbon County.

Grand County has had 58 cases of the virus, one of which remains active. The lone death in the region was a Grand County man over the age of 85. There are no current hospitalizations in Grand County and 56 patients have recovered.

The Southeast Utah Health Department is also tracking cases that involve students, teachers or staff of the local school districts. Since school resumed in August, there have been 10 cases involving the districts. The Carbon School District has recorded eight cases of the virus. Six of these patients have recovered, leaving two active cases. In the Emery School District, two cases have been confirmed, one of which remains active.

For additional case breakdowns, see the graphs below. 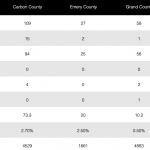 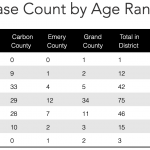 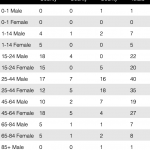 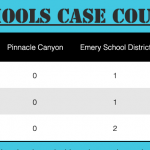