The USU Eastern-College of Southern Idaho series started out with a thriller as the Eagles fell short in the 11th inning of game 1 last week. Eastern was led by great performances on the mound by Ky Decker and Westin Corless, who both threw extremely well to keep Utah State Eastern in the game.

“I was extremely pleased with the way these two through for us today,” said head coach Kirk Haney. “They both challenged and gave our team an opportunity throughout the game to win.”

CSI finished the game on a walk-off home run. Eastern was led at the plate by Scott Bahde and Ty Barker, who each had two hits on the day. Barker had a solo home run in the game.

Hayden Brock had a great outing on the mound in game 2, giving up just four hits and throwing a complete game. Brock only allowed one run in his seven innings. The Eastern team played well behind him with multiple great plays by Gabe Childs in center field.

At the plate, Childs led, collecting three of the Eagles’ six hits in the game and recording one RBI. Duke Kirby, Jake Mortensen and Bahde collected the three other hits in the game.

“Both teams’ pitching was on,” said Haney. “It was great for us to see our guys get the little things done right. We are slowly getting better.”

Vaughn Deming had three hits in game three and allowed for some spark for USU Eastern. The Eagles had chances in every game this year, but the biggest thing has been finding the players who will capitalize when needed.

Kody Nelson, Tyler Fitch and Jordan Brown all threw in the contest and did their best to keep Eastern in the game. “The nice thing about this group is we saw Kody didn’t have his best stuff, so we went right to Fitch, who kept us in the game and allowed our hitters to have a chance,” said Haney.

Utah State Eastern fell short in game 4. There were many chances for the Eagles to capitalize on, but they could not get it done. Carson Hawkes threw well, getting out of many big situations. Dakari Armendariz had two hits in the contest.

“This was a tough day from the beginning. We were missing a couple players. The weather had some effect on some balls in play, but we still worked hard. We will look to bounce back next week while at home against CCC,” concluded Haney. 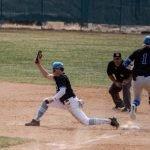